British economy could contract by 35% and unemployment increase by 2M, according to government economic body 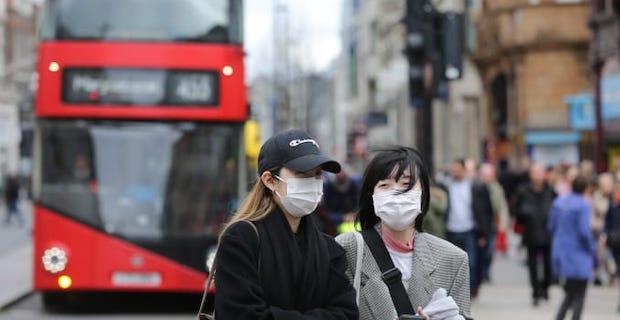 British health authorities announced on Tuesday that the death toll from coronavirus across the U.K. increased by 778 in the past 24 hours. “As of 5pm on 13 April, of those hospitalised in the U.K. who tested positive for coronavirus, 12,107 have sadly died,” the Department of Health reported. It said 93,873 people tested positive out of 302,599 people tested in total. The latest figures came as two of the U.K.’s largest care home providers said Tuesday that 521 of their residents had recently died from coronavirus. The national figures released by the government include only deaths in the National Health Service. There has been greater attention paid to the situation in care homes in recent days, with calls for deaths there to be included in the national toll so that the true number of deaths from coronavirus is accurately reported.

Figures by Organization for National Statistics (ONS) showed Tuesday, there were nearly 15 % more deaths in the U.K. than the figures released by the government until April 6. On Monday, local media said a report by the London School of Economics found that deaths in care homes made up around half of deaths in Italy, Spain, France, Ireland, and Belgium. The U.K.’s chief scientific adviser Sir Patrick Vallance also said that testing for coronavirus scaled up quickly enough in England. Vallance told ITV: “I think at the beginning Public Health England got off to a good start in terms of testing to try and make sure they caught people coming into the country with it.  “I then think it’s not scaled as fast as it needs to scale – and that’s being done now. But I do think testing is an incredibly important bit of this. It needs to be done at scale, and it needs to be able to be done rapidly enough to look at outbreaks and isolate.” The Turkish Embassy in Britain said on Tuesday that 28 Turkish citizens have died so far in the U.K.’s coronavirus outbreak.

Britain’s Office for Budget Responsibility (OBR), an independent public body that reports in the sustainability of the U.K.’s public finances, said Tuesday that the British economy could contract by 35% due to the outbreak. The OBR said: “The longer the period of economic disruption lasts, the more likely it is that the economy’s future potential output will be scarred.” It said that British GDP could shrink by over a third in the second quarter of 2020, and fall 13% for this year as a whole. It also warned unemployment could hit 10% by the end of June and that public borrowing would increase at the quickest pace since the end of World War II, with the figure assessed to reach £273 billion, 14% of GDP. Nevertheless, the OBR said: “The immediate cost of the government’s actions may be high, but we can be confident that the cost of inaction would ultimately have been much higher.”

After originating in Wuhan, China last December, the virus has spread to at least 185 countries and regions across the world, with Europe and the U.S. now being the worst-hit regions.

The virus has infected over 1.93 million people worldwide, while nearly 121,000 have died and almost 465,000 have recovered from the disease, according to data compiled by the U.S.-based Johns Hopkins University.

Keywords:
CoronavirusCovid 19British Economy
Your comment has been forwarded to the administrator for approval.×
Warning! Will constitute a criminal offense, illegal, threatening, offensive, insulting and swearing, derogatory, defamatory, vulgar, pornographic, indecent, personality rights, damaging or similar nature in the nature of all kinds of financial content, legal, criminal and administrative responsibility for the content of the sender member / members are belong.
Related News