Local business owner Richard Reeve has discovered an innovative way of making deliveries to customers while helping to reduce his carbon footprint. When the first COVID-19 lockdown was announced in 2020, Richard had to temporarily close The Little Green Dragon Ale House micropub in Green Lanes, Winchmore Hill.He decided to operate a real ale and craft beer delivery service in Enfield and Winchmore Hill by initially using his car. Richard contacted Enfield Council’s Healthy Streets Team, to ask if he could borrow one of their e-cargo bikes on a trial run, so he could to help reduce carbon emissions produced from using his car and to see if ultimately it was a suitable mode of delivery transport for him.After completing the relevant insurance and legal paperwork, Richard took part in a six-week trial and he fed back his experiences and thoughts to the Council.The environmentally friendly mode of transport was perfect for his needs and he discovered that journey times were comparable to making deliveries by car, but much less affected by traffic congestion. He has since purchased a Little Green Dragon Ale House micropub branded e-cargo bike. 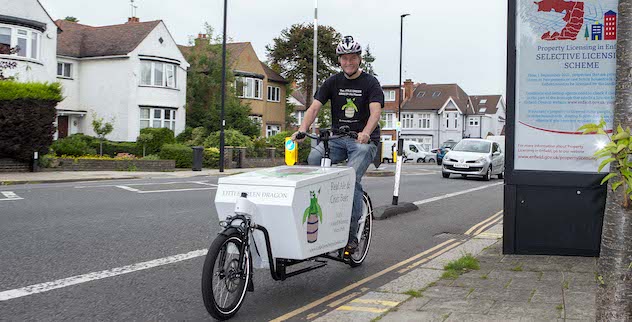 Richard's e-cargo bike was partly funded by a Crowdfunder and match-funded by the Mayor of London. It is electrically assisted with a range of 30 miles and can carry up to 150kg.

As the trial was so successful, Enfield Council will be working towards extending the offer of a loan of an e-cargo bike/trike to small local independent businesses in the borough in the near future, as part of a ‘try before you buy’ scheme.

Richard Reeve said: “During the lockdowns, the roads were quiet and getting around wasn't a problem. But as the lockdowns eased, traffic seemed to increase to even higher levels than before COVID-19, especially around the end of the school day.

“I found it hard to predict how long deliveries would take, especially as I now needed to be back in time to open the pub. I would moan about the traffic, but deep down I knew that by using my car for deliveries I was also part the problem.

"I would like to thank Enfield Council for the loan of the bike, which gave me the confidence that buying our own bike would be a viable solution.  I would urge other businesses to take up Council's offer of trying out a cargo bike. You may be surprised to discover how versatile they are."

Cllr Ian Barnes, Deputy Leader of Enfield Council, said: “E-cargo bikes and trikes are a fantastic environmentally friendly mode of transport that are perfect for the use of businesses who carry out deliveries locally.

“I was heartened to hear how Richard showed such initiative and thought about how he could reduce his carbon emissions, by testing a new mode of transport that has ultimately turned out to be ideal for him. I would encourage other independent local businesses in the borough to follow Richard’s lead by contacting us to find out more about the loan of an e-cargo bike or trike.

“We are committed to making the Council net carbon neutral by 2030, with the entire borough following by 2040.”

Small, local and independent businesses in Enfield who are interested in finding out more about the loan of an e-cargo bike/trike can register their interest by emailing the Council’s Healthy Streets team at: healthy.streets@enfield.gov.uk