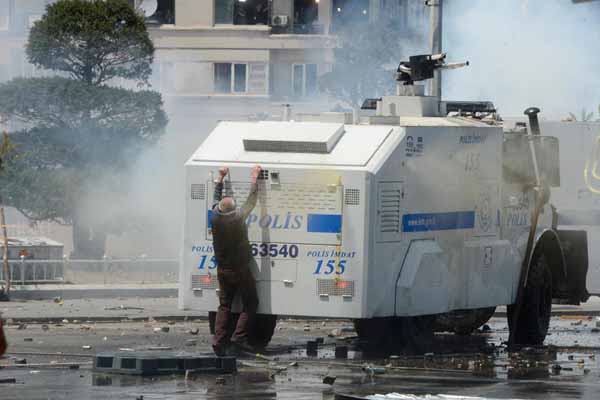 Several dozen Turkish riot police on Tuesday briefly entered the Gezi Park in central Istanbul at the heart of two weeks of protests which have turned into nationwide anti-government demonstrations, an eyewitness said The police entered the Taksim Square to take down illegal placards.   As indicated by Governor of Istanbul Huseyin Avni Mutlu's remarks aimed to easing the tension, Turkish police changed their attitude and reaction on Tuesday as they cleared the Taksim square and have not entered Gezi Park. Compared to the onset of Taksim Gezi Park protests and incidents, Turkish police on Tuesday are seen remaining calm and avoiding any clashes with protesters. As Governor Mutlu stated on Tuesday on his Twitter account, Turkish police intervened in Taksim on Tuesday as of 06.00 GMT only to clean the square, the Ataturk statue and the Ataturk Culture Center (AKM) building of banners, slogans and posters.

Mutlu guaranteed Taksim protestors and demonstrators that nobody will ever touch Gezi Park and Taksim, saying "Your safety is guaranteed by your police brothers."

Highlighting that the police would maintain their ready stance against possible banners in a calm and controlled way in the square, Mutlu said “I once again confirm that Gezi Park will not be targeted by police intervention.”

"There is no problem with you waiting night and day in Gezi Park and Taksim. We are all upset about the incidents, which we would never want to be repeated," he noted.

Mutlu asked the demonstrators residing in tents in Taksim Gezi Park to calmly stay where they are, avoiding any provocations and possible failing acts.

He emphasized that the banners and posters hanged in Taksim Square turned into an advertising campaign for several legal and illegal voices out of the demonstrators' actual ideals and expectations, creating an image of Turkey at home that upsets Turkish people. This picture tarnishes Turkey's reputation abroad, Mutlu also said.

However, as Governor Mutlu stated, some marginal groups tried to provoke the police despite no intervention or reaction by the police.

“While the collection work was going on, some marginal groups tried to clash with the police. Necessary steps were taken by the police to prevent any clash,” he said.

He stressed that "Some protestors used materials emitting fog and smoke, trying to give the impression of excessive use of tear gas by the police."

He also announced that the armed man in a police uniform in Taksim appearing on television was discovered to be an activist and a former prisoner sentenced to 6 months for his involvement in the Revolutionary Headquarters Organization.

In his last Tweets, Mutlu thanked the demonstrators who were not involved in violence for their caution against provocator groups.

“We know that marginal groups tried to organize an anti-police resistance through throwing smoke bombs, molotov cocktails and fireworks, to create a perception that police were using excessive pepper gas. The public and the youth in Gezi Park showed a careful stance. We will continue our excellent cooperation,” he added.