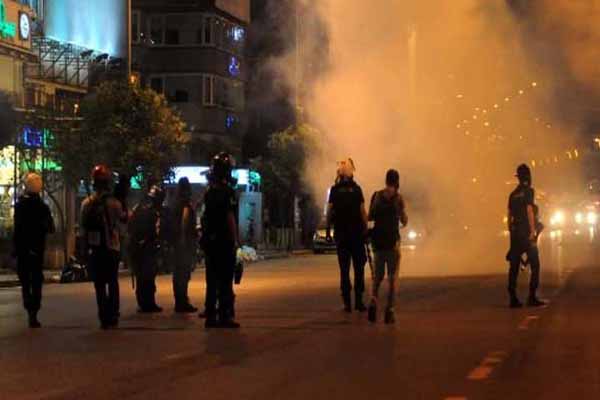 Riot police have fired tear gas and water cannon at protesters in Istanbul's Taksim Square and Gezi Park, dispersing them just hours after Prime Minister Recep Tayyip Erdogan issued a Sunday deadline for those occupying the park to leave or face eviction. Lines of police backed by armoured vehicles sealed off Taksim Square in the centre of the city on Saturday as officers stormed the adjoining Gezi Park, where protesters had been camped in a ramshackle settlement of tents for more than two weeks. Residents in surrounding neighbourhoods took to their balconies or leant out of windows banging pots and pans, while car drivers sounded their horns in support of the protesters. Several people were brought out of the park on stretchers as ambulances waited to receive them.

Earlier, PM Erdogan addressed a rally of thousands of supporters in the capital Ankara.

"We have our Istanbul rally tomorrow. I say it clearly: Taksim Square must be evacuated, otherwise this country's security forces know how to evacuate it," he said.

Erdogan flexed his ruling Justice and Development (AK) Party's muscles in the rally organised hours after sit-in protesters in Gezi Park rebuked the government’s calls for them to leave their position.

Turkey has been in turmoil since late May after a sit-in protest against an urban development project in the heart of Istanbul transformed into countrywide anti-government demonstrations.

In the AK Party rally in Ankara, the prime minister also accused "a network of treachery" of being responsible for the unrest that has gripped the country for more than two weeks.

Erdogan said that the protests are not about the environment, as those in Taksim Square say, but are part of a plot "coordinated inside and outside" Turkey.

"I will reveal this network of treachery with the documents proving [it]," he said.

He blamed the protesters for vandalism both towards AK Party buildings and public property. He also accused the protesters of attacking women wearing headscarves and entering mosques with their shoes on.

Reporting from Ankara, Al Jazeera’s Hashem Ahelbarra said that Erdogan was very defiant in his speech, lashing out at protesters. "Now we have to wait the reaction of the protesters at Gezi Park to Erdogan’s ultimatum," our correspondent said.

Erdogan's ruling party has organised a series of rallies in Ankara and Istanbul this weekend in order to show the support he continues to enjoy. The rally in Ankara on Saturday was entitled "Respect for the National Will".

The prime minister frequently makes remarks about his party's legitimacy and the fact that it won 50 percent of the votes in 2011 elections, referring to "the ballot box" as the base of democracy.

Meanwhile, in Gezi Park itself, protesters have refused to vacate the siteof the sit-in despite a call from the president

for them to withdraw and a pledge from Erdogan to wait for a final court verdict to decide on the urban development project that ignited the protests in the first place.

"We will continue our resistance in the face of any injustice and unfairness taking place in our country," the Taksim Solidarity group, seen as most representative of the protesters, said in a statement on Saturday.

The decision came a day after Erdogan met with members of the group, along with artists and actors.

President Abdullah Gul, who has struck a more conciliatory tone than Erdogan throughout the protests, has called on the protesters to return home.

Following the meeting with protesters early on Friday, Erdogan accepted to delay the redevelopment of Gezi Park pending a court decision on its legality. He also said a referendum would be held to determine the park's fate, even if the court ruled in favour of re-development.

Earlier on Saturday, Kemal Kilicdaroglu, leader of the main opposition Republican People's Party (CHP), called on the government to respect the decision taken by the sit-in protesters at Gezi Park to continue their action.

"The youths have taken the decision to go on with their sit-in protest. They have been discussing [to continue or not] for a while. We have to respect their decision as it is supposed to be in democracies," Kilicdaroglu, who met foreign media members at a hotel in Istanbul, said, stressing that in his opinion the sit-in action is legal.