Syrian rebel leaders met with the U.N. Security Council for the first time on Friday to discuss the country's two-year war 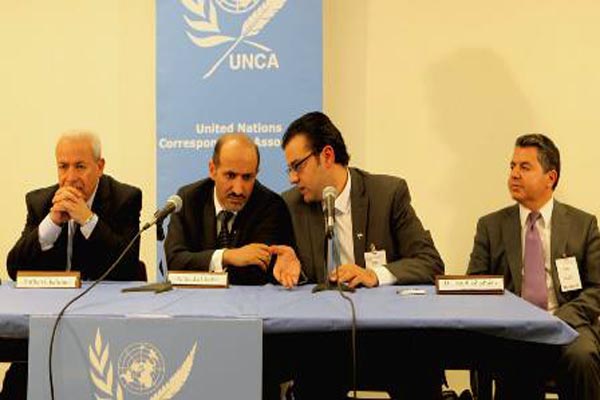 The 15-member Security Council has been deadlocked on Syria. Russia, an ally and arms supplier of Assad, and China have three times blocked action against Assad supported by the remaining veto powers - the United States, Britain and France. "We asked them (Russia) to stop providing the political and military support for this criminal regime to continue its crimes against the Syrian people," senior Syrian National Coalition member Najib Ghadbian told reporters after the meeting. The Syrian National Coalition delegation to the informal meeting, organized by Britain, was led by newly elected leader Ahmed al-Jarba. On Thursday the group met with U.S. Secretary of State John Kerry and called for the United States to arm the rebels quickly and to push harder for a political settlement. The United Nations says more than 100,000 people have been killed since Syria's civil war erupted, pitting Assad's forces against rebels seeking to end his family's four-decade rule. Russian U.N. Ambassador Vitaly Churkin described the meeting in New York as "useful" and said it was up to the international community to bring both sides together to "stop this nonsense of endless bloodshed."

The United States, Russia and the United Nations are still working to convene a meeting in Geneva between the Syrian government and opposition groups to try to broker a peace deal.

So far, attempts to organize a so-called "Geneva II" peace conference on Syria to revive a political transition plan agreed in the Swiss city in June 2012 have been futile. U.N. diplomats say it is increasingly unlikely that such a conference will take place anytime soon, if at all. But Churkin was still hopeful.

"Clearly there are still some obstacles to be overcome for the 'Geneva II' conference to be convened," he said. "There is still a good chance ... because the alternative would be so horrifying, so it's definitely better to keep trying."

The opposition delegation, which included Burhan Ghalioun and Michel Kilo, appealed to the Security Council to pressure Assad to commit to the creation of a transitional government with full executive powers that would not include him.

Jarba said that once Assad "makes this commitment we (the opposition) are ready to go to Geneva" for the peace conference.

The opposition also appealed for government forces to at least stop using heavy weapons ahead of any Geneva conference. "It does not mean to stop the war because we know that Bashar al-Assad will not agree to a ceasefire," Ghalioun said.

The United Nations said that nearly 1.8 million Syrians have fled the country - two thirds of those since the start of the year - and more than 4.2 million people have been internally displaced. Most of those in need are women and children.

The Syrian opposition asked the Security Council to boost access for aid agencies in the country and to refer the Syrian government to the International Criminal Court in The Hague, which prosecutes war crimes and crimes against humanity.

"Most of the work of the U.N. agencies is done through the Syrian regime and we are concerned that there should be more ways, cross-border assistance maybe, to reach those in the liberated areas," Ghadbian said.

Some western Security Council members are considering a push for a resolution to increase aid access in Syria if attempts to hold a Geneva peace conference fail, but such a move is likely to lead to another showdown with Russia.

British U.N. Ambassador Mark Lyall Grant said Jarba made "a very strong statement of commitment of the unity of Syria, to democracy and to plurality" and condemned groups which might exploit the situation.

"I think members of the Security Council will have been encouraged by the commitment shown by the opposition. It remains to be seen whether the regime is equally committed," he said.