Police intervene in Gezi Park protests in İstanbul and Ankara 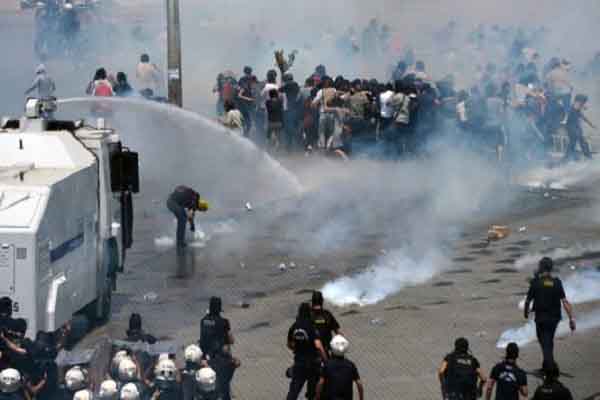 Protesters gathered at Istanbul's main square following the call of the activist group Taksim Solidarity Platform, reading out a statement to commemorate the four people who have been killed during the three-week-long Gezi Park demonstrations.  Demonstrators split into smaller groups retreating and regrouping in side streets as police later fired tear gas and rubber bullets. Following the protests Istanbul Governor Huseyin Avni Mutlu said the intervention of the police was necessary as the protests harmed public safety.  Speaking to the Anadolu Agency, Mutlu said "Taksim Solidarity Platform calls for spoiling the peaceful environment restored in Taksim. These are actions that harm the city and its people." Mutlu stated the group blocked Taksim Square for one hour, adding call for protests was illegal as they harmed the public safety as well as public transportation, and the traffic around Taksim.  In the capital Ankara, riot police fired water cannon and teargas to break up hundreds of protesters, some of them shouting anti-Erdogan slogans, and at one location they built barricades to block a main street, according to witnesses. Earlier, Erdogan told thousands of supporters in the Black Sea city of Samsun that the unrest played into the hands of Turkey's enemies.

A crowd of some 15,000 of his AK Party faithful cheered and waved Turkish flags as he called on the public to give their answer to demonstrations at the ballot box when Turkey holds municipal elections next March.

The rally in the party stronghold was the fourth in a series of mass meetings which Erdogan has called since protests began in Istanbul at the start of June in an unprecedented challenge on the streets to his 10-year rule.

The blunt-talking 59-year-old, who has led Turkey through an economic boom and still enjoys broad popular support, went on the offensive again, saying an "interest rate lobby" of speculators in financial markets had benefited from the unrest.

"Who won from these three weeks of protests? The interest rate lobby, Turkey's enemies," Erdogan said from a stage emblazoned with his portrait and a slogan calling for his supporters to "thwart the big game" played out against Turkey.

"Who lost from these protests? Turkey's economy, even if to a small extent, tourism lost. They overshadowed and stained Turkey's image and international power," he said.

On Sunday, Erdogan will address a rally in the eastern city of Erzurum, also an AK Party stronghold.