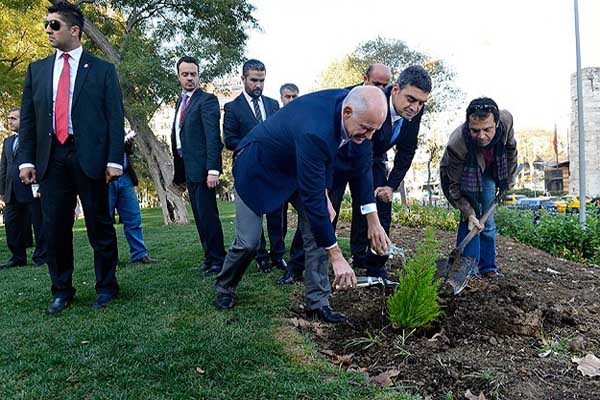 Socialist International (SI) President George Papandreou on Tuesday visited Gezi Park in Istanbul's Taksim square, where anti-government protests were held in May and June. Papandreou along with Republican People's party (CHP) Deputy Chairman Umut Oran planted a tree in the park and stressed the importance of relations between the two countries and democratic values. "I've always meant the idea that we can imagine together a different world, we can imagine together a better world. Democracy has always been the idea that we all support," he told reporters, "I think this [Gezi Park] is symbolising the power that our citizens around the world create a better future and decide on their own fate." Former Greek Prime Minister Papandreou later attended the SI Council meeting, in which a final declaration will be announced on its final day. The Council meeting was organized by Turkey's main opposition Republican People's Party (CHP) and brings together leaders and delegates from SI member parties and invited guests.