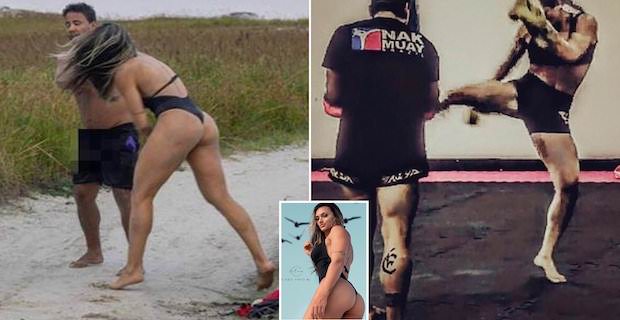 An MMA fighter was caught on camera punching a man after allegedly spotting him masturbating in front of her during a swimwear photo shoot. The incident occurred as fighter Joyce Vieira and a friend were taking photos on the Praia do Braga beach in Rio de Janeiro. Vieira said the man, named in reports as Josenei Viana Ferreira, 26, began playing with himself in front of her and her unnamed friend so she decided to take action. She said: ‘When I looked over there he had his shorts down and was standing on a path where people pass all the time, including children.

‘He was visibly erect, making sounds and moaning.’

In the photos, the martial artist, dressed in a black swimsuit, can be seen punching Ferreira, who is topless but dressed in swimming shorts. Vieira registered the case with police and Ferreira was later arrested for committing an ‘obscene act’ but has since been released after giving a statement and denying the crime. After his release, Vieira told local media: ‘We feel powerless. ‘It’s very strange because he’s going to be in the same city as me, and who knows he might be in the same places. 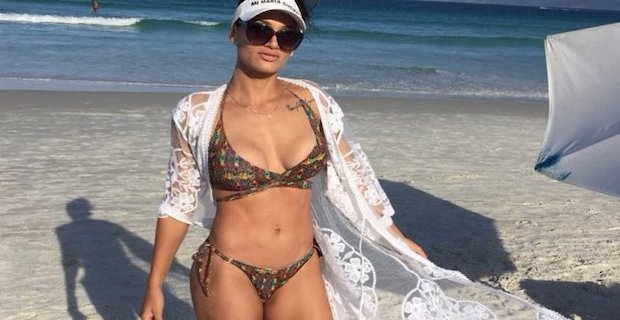 ‘That’s why I have received an innumerable number of messages from women saying that (in similar situations) they didn’t file a report, because they know the suspects would end up being released. ‘I think the punishment for these cases should be more severe.’ 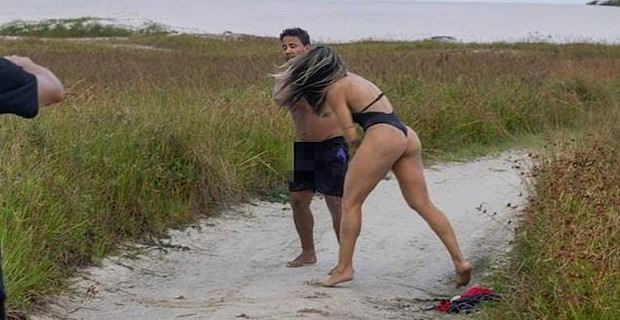 Vieira said she had tried to speak to the man but he refused to speak to her so she reacted. The Civil Police told reporters the suspect had claimed he ‘was urinating’ on the beach before Vieira approached him. Inspector Juliana Rattes, said the case will be taken to the Public Ministry ‘who will act together with special criminal court’.

Keywords:
MMA Fighter
Your comment has been forwarded to the administrator for approval.×
Warning! Will constitute a criminal offense, illegal, threatening, offensive, insulting and swearing, derogatory, defamatory, vulgar, pornographic, indecent, personality rights, damaging or similar nature in the nature of all kinds of financial content, legal, criminal and administrative responsibility for the content of the sender member / members are belong.
Related News