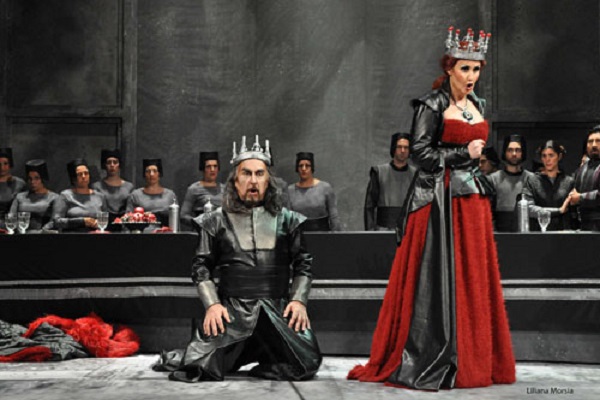 Shakespeare’s classic exploration of ambition, guilt and destiny opens at the Globe on 22 June 2013, the third and final play in the Season of Plenty’s trio of supernatural Shakespeares. The production features Joseph Millson and Samantha Spiro as the murderous couple at the heart of the play, with Billy Boyd as Banquo and Gawn Grainger as Duncan. Celebrated cabaret artist Bette Bourne will play the Porter.

First-time director Eve Best returns to the Globe at the helm of the Scottish play, having appeared as Beatrice in the 2011 production of Much Ado About Nothing. She also recently played the eponymous Duchess in The Duchess of Malfi at the Old Vic and Wallis Simpson in the Oscar-winning film The King’s Speech. Eve won the Olivier Award for Best Actress for her performance in the title role in Hedda Gabler at the Almeida in 2005. She is also a two-time winner of the London Critics Circle Award for Best Actress, for Hedda Gabler and Mourning Becomes Electra at the National Theatre, and a two-time nominee of the Tony Award for Best Actress.

Joseph Millson won great critical acclaim for his performance as Benedick in the Royal Shakespeare Company’s Much Ado About Nothing. His other recent theatre credits include Rocket to the Moon (National Theatre), Love Never Dies (Adelphi Theatre) and The Priory (Royal Court). His film credits include I Give It A Year and Casino Royale, and his television credits include Holby City and Ashes to Ashes.

Double Oliver Award-winner Samantha Spiro returns to the Globe after her triumphant turn as Katherina in last year’s production of The Taming of the Shrew. Her other recent theatre credits include Filumena (Almeida Theatre), Chicken Soup With Barley (Royal Court) and Twelfth Night (Donmar/Wyndhams). Her recent television credits include Grandma’s House and Bad Education.

Billy Boyd is best known for his role as Pippin Took in the blockbuster film trilogy The Lord of the Rings. His other film credits include Irvine Welsh’s Ecstasy and Master and Commander. His television credits include Casualty and Moby Dick.

Bette Bourne is a classically-trained actor who performed alongside Sir Ian McKellen in the 1960s, before becoming an activist with the Gay Liberation Front and forming his own cabaret troupe. His theatre credits include Resident Alien (Bush Theatre), Pericles (Lyric Theatre) and Much Ado About Nothing (Novello Theatre). Bette won a Clarence Derwent Award for The Vortex (Donmar Warehouse) and a Manchester Evening News Award for The Importance of Being Earnest (English Touring Theatre).

Gawn Grainger’s career as a distinguished actor and playwright spans over 60 years. He made his London stage debut in 1950, before joining Laurence Olivier's National Theatre at the Old Vic company in 1972. His recent theatre credits include The Recruiting Officer (Donmar Warehouse), A Woman Killed with Kindness (National Theatre) and The Last Days of Judas Iscariot (Almeida Theatre).

Macbeth will be the sixth show that Mike Britton has designed for Shakespeare’s Globe. Mike’s other credits include Hero (Royal Court), The Promise (Donmar Warehouse) and Abigail’s Party (West End/Menier Chocolate Factory). In 2007 he won the Manchester Evening Post Award for Best Design for Henry V (Royal Exchange). Composer Olly Cox is also well-known at the Globe, having worked on seven previous productions. His other credits include Women Beware Women (National Theatre), Therese Raquin (National Theatre) and Much Ado About Nothing (RSC).