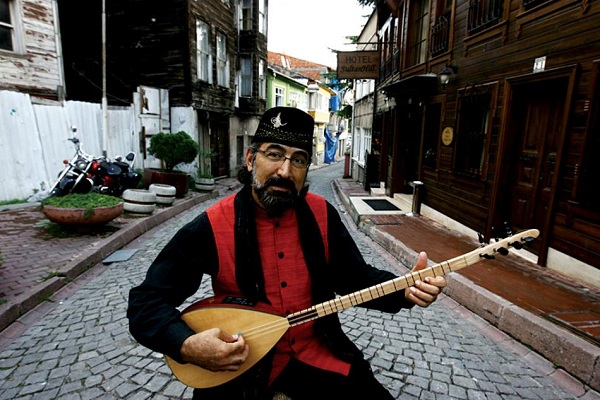 “Dance, when you're broken open. Dance, if you've torn the bandage off. Dance in the middle of the fighting. Dance in your blood. Dance when you're perfectly free.” - Rumi

Sufi mystic musician, singer and composer Latif Bolat will present music, poetry, Sufi mystic stories and images of the Wandering Dervishes from the ancient land of Turkey. Traveling from the Mediterranean city of Mersin in Turkey, Latif Bolat plays Turkish Folk ballads and ecstatic devotional Sufi songs. These are the ritualistic music and poetry of the Anatolian mystics since the 12th Century.

From the horrifying years of the Crusaders and Genghis Khan's destruction in the Middle East to the present days, people found great comfort in this Sufi culture. Throughout the program, Latif Bolat will also recite devotional poetry from 13th Century Sufi poets Yunus Emre, Rumi and other ancient poets.

One of the most well-known Turkish musicians in the US, his mesmerizing performances draw on ancient texts and employ traditional instrumentation such as the Saz (long necked lute.) Now residing in Istanbul, Turkey, Latif Bolat has presented his music all across America, Canada, Australia, New Zealand, Indonesia, Singapore, Bulgaria, Spain, Turkey, Philippines and the UK. In addition to the concerts and lectures around the world, he has recorded 4 very successful CDs, made many TV and radio appearances and composed music for the PBS Documentary Muhammed: Legacy of a Prophet and George Lucas's TV series Young Indiana Jones.

With poet Jennifer Ferraro, he translated a compilation of ancient Turkish Sufi poets entitled Quarreling with God: Mystic Rebel Poems of the Dervishes of Turkey which is published by White Cloud Press in Oregon, USA.