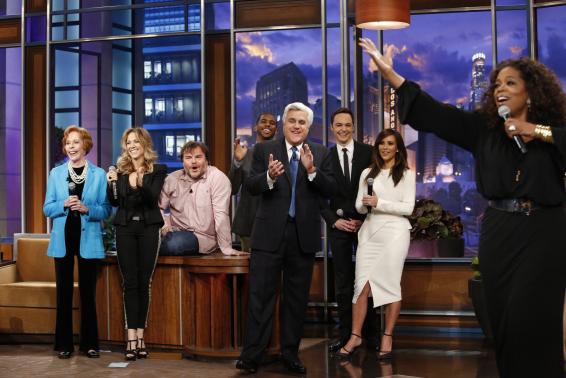 Leno's emotional farewell on Thursday was the comedian's fourth-largest "Tonight Show" audience since he took the reins from Johnny Carson in 1992. The finale attracted the same number of viewers who tuned in to watch Leno interview U.S. President Barack Obama in 2009, in what was the first ever appearance of a sitting president on a late-night talk show. Carson, who led the show for 30 years, attracted 42 million viewers for his final show in 1992, in an era when broadcast television commanded far greater audiences than today. Viewership of the "Tonight Show," which has been the top-rated late night show under Leno's guidance since 1995, was also helped on Thursday by NBC's lead-in coverage of the first day of Winter Olympics. Leno, 63, was given a star-studded good-bye with comedian-actor Billy Crystal as the featured guest and surprise appearances by Oprah Winfrey, Jack Black, Carol Burnett and Kim Kardashian, among others.

Audiences during Leno's final week rose to nearly 5 million per episode compared to the season average of 3.9 million.

Current "Late Night" host Fallon, 39, will take over for Leno on February 17 as Comcast Corp-owned NBC attempts to transition the show to the younger, under-50 demographic most coveted by advertisers while keeping its grip atop the ratings.

It is not known if Leno will pursue another show in television once his contract with NBC expires in September, but the comedian will tour his stand-up show as he has done in years past.