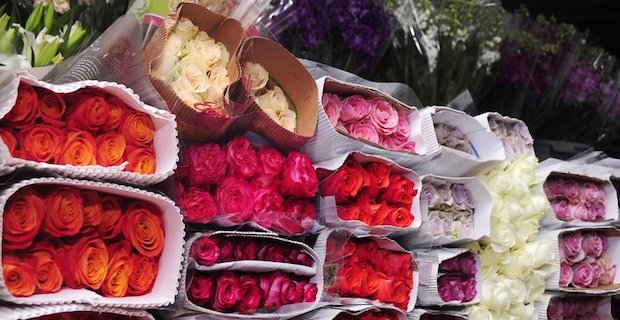 Some 2.5 billion Turkish liras (roughly $475 million) is spent on flowers every Valentine’s Day in Turkey, a Turkish florist union chief said on Monday.

"[The amount of] flowers produced in a month are sold on [a single day on] Feb. 14", Ismail Basaran told Anadolu Agency.

"One out of four gifts is a flower," Basaran said, underlining that flowers were often the first gifts to come to mind.

While roses are usually the most preferred, he noted that people also buy their loved ones orchids, lilies and daisies on Feb. 14.

While florists do not often get receive such orders Basaran said that some seeking "something different" bought sets of 1001 roses, a bouquet of which cost 10,000 Turkish liras ($1,896).

Valentine’s Day is celebrated with cards, flowers, and chocolates but has its roots in a 3rd-century priest in Rome who performed secret marriages between young people.

Martyred by the Roman emperor Claudius II in 270 A.D., St. Valentine is honored by Christian churches every year.

However, across the world also in Turkey, young people have developed a fashion for surprise proposals on this day.

Keywords:
Valentine’s Blossom
Your comment has been forwarded to the administrator for approval.×
Warning! Will constitute a criminal offense, illegal, threatening, offensive, insulting and swearing, derogatory, defamatory, vulgar, pornographic, indecent, personality rights, damaging or similar nature in the nature of all kinds of financial content, legal, criminal and administrative responsibility for the content of the sender member / members are belong.
Related News