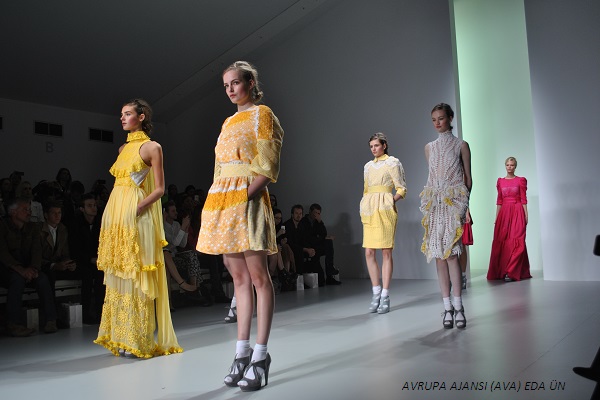 Aksu's spring/summer 2014 collection, launched at the London Fashion show, utilised Turkish fabrics and traditional techniques, with the colour palette of the collection being influenced by Turkish coastal resorts.

Bora Aksu says of his new collection: 'I’m delighted to have worked with the Turkish Ministry of Culture & Tourism as official sponsor for this London Fashion Week show. After 10 years showing in London it’s been great to go back to my roots and be inspired by the rich culture and traditional artistry of Turkey. I hope the show will inspire people to explore Turkey and discover the amazing gems it has to offer.'

Trained at Central St Martin's in London, Aksu's collaborations include Topshop, Nike, Converse, Anthropologie, and Absolute and he has created costumes for such singers Kate Nash, Clare Maguire and Tori Amos as well as dressing Keira Knightley and Sienna Miller for film junkets. Aksu produces four collections a year, with his first handbag collection launched in autumn/winter 2012 at Harrods.

Celebrating 10 years at London Fashion Week this year has spurred Bora Aksu to look back to his Turkish homeland and its rich, colourful and diverse culture. His spring/summer 2014 collection has been inspired by his childhood memories of there, memories that have had such a big influence on him.

Although Bora's childhood memories of Turkey are still as magical today as when they were first played out, as Bora spent more and more time in London and travelled the world their uniqueness and richness has become more valuable to him. The long, hot summer days spent on the Aegean coast are the most prominent recollections that Bora draws on for this season's inspiration. Long stretches of white sand, bobbing fishing boats, sun-faded houses with lush gardens and hidden village markets are the happy times that give his spring/summer collection a less melancholic feel than has been his signature to date.

Bora Aksu explains: “When I realised that this would be my tenth year at London Fashion Week, it struck me how long it has been since I left Turkey to come to study in the UK. It propelled me to reminisce and look back at my roots. I felt that I wanted to re-ignite the passion coming from the rich culture and traditional artistry of Turkey that had inspired me in the first place.”

The patterns and textures of the Iznik tiles that adorn the show invite have been re-created using traditional handwoven Turkish textiles incorporated into pencil skirts, dresses, cropped jackets and boleros.

Layering continues to be key, with geometric laces over silk tulles and chiffons or used as sheer panels against quilted cotton for added texture in skirts and dresses. Hand crochets produced in Izmir create accents across the collection.

Classic shapes have been contrasted with summer shorts and knitted tees while plastinated cottons update the traditional feel.

The colour palette for the collection began with the traditional ‘nazar boncuk’ or ‘evil eye bead’. Worn in Turkey to ward off evil, legend says that if one should break it is a sign that you have been saved from a great misfortune. Traditionally made from a disc of blue glass, it is this protective colour of the evil eye that dominates the collection. Off-whites also play a key role keeping the collection light before bold injections of bright yellows and fuchsia are introduced, reminding Bora of the long hot summers that he so enjoyed.

“This collection has been incredibly personal for me” Bora Aksu says “It’s been fantastic to have the support from the Turkish Ministry of Culture and Tourism and to take this first step in highlighting a land I am so passionate about and connected to. I hope the show will inspire people to explore the rich culture and traditional artistry that Turkey has to offer.”