Sounds of Eurasia Concert in Oxford, London and Edinburgh

The tour of the Youth Chamber Orchestra of TURKSOY to Great Britain is about to start. 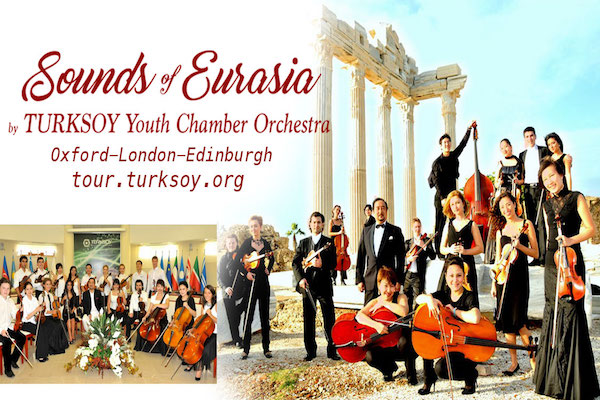 Young talents of the orchestra who will take the scene with a whole new repertoire will give their first concert in Oxford on July 25th, 2016. This will be followed by two other concerts in London on July 26th, 2016 and Edinburgh on July 30th, 2016.

To attend the concerts, you may either register on our website tour.turksoy.org or send us an e-mail to rsvp@turksoy.org mentioning your name, surname, e-mail address and the number of seats you would like to reserve. (Free)

Calendar of the Tour

The International Organization of Turkic Culture (TURKSOY) is an organization carrying out cultural and artistic activities to strengthen the ties of friendship among Turkic speaking peoples and countries with a view to exploring, promoting, preserving and transmitting their common cultural heritage, language, history, art, customs and traditions to future generations. TURKSOY was established on July 12th, 1993 upon signature of its founding agreement by the Ministers of Culture of Azerbaijan, Kazakhstan, Kyrgyzstan, Turkmenistan and Uzbekistan in Almaty. Later on, the organization was joined by the Turkish Republic of Northern Cyprus, as well as by autonomous republics of the Russian Federation: Altai, Bashkortostan, Khakassia, Sakha Yakutia, Tatarstan, Tyva and Gagauzia (Moldova) which are member countries of TURKSOY with an observer status. Today, TURKSOY gathers 14 Turkic speaking states and communities under its auspices. As such, it is an international organization carrying out activities which reach beyond the borders of the Turkic World. Within the framework of activities it carries out, TURKSOY which is refered to as the UNESCO of the Turkic World, also regularly cooperates with the United Nations, the UNESCO, the Council of Europe, the ISESCO and the Council for Humanitarian Cooperation of the Commonwealth of Independent States (CIS). As an efficient institution of cultural diplomacy established upon initiative of the Ministers of Culture of Turkic republics, TURKSOY has been carrying out activities to strengthen cultural ties among Turkic peoples on the one hand while introducing Turkic culture to the World on the other hand since 1993.