The sale will include an exceptional selection of over 100 ceramics by Pablo Picasso. 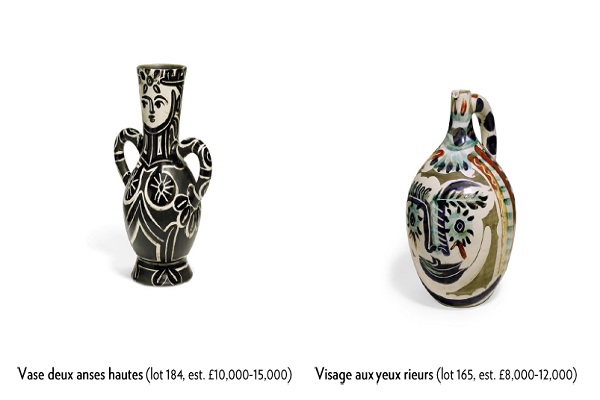 Sotheby’s London Sale of Prints & Multiples on 17 September 2013 will offer a stellar selection of prime works by Munch, Rembrandt, Picasso, Basquiat and Warhol, among others, together with an exceptional selection of ceramics by Picasso.

The auction will be led by several rare woodcuts by Edvard Munch, an offering concurrent with the series of exhibitions in Oslo marking the 150th anniversary this December of the artist’s birth.

• Two Women on the Shore, estimated at £400,000-500,000, is a powerful expression of Munch's preoccupation with the themes of loneliness, sex and death.

• Estimated at £130,000-180,000, Encounter in Space depicts a man and a woman floating together in a weightless cosmic vacuum and demonstrates the radical nature of the artist’s printmaking process.

Rembrandt is represented in the sale by a remarkable series of etched self-portraits, spanning a period of over ten years, from 1630 to 1642. The group of eight etchings is notable for the range of expressions in which the artist depicts himself, and the inquisitive, penetrating self-inflection that has come to define his unique standing in self-portraiture.

Property from The Collection of the Late Stanley J. Seeger

The sale will present 22 prints from the Collection of the Late Stanley J. Seeger. Whilst finishing his studies at Princeton University, Stanley Seeger acquired an etching by Pablo Picasso, which would spark his life-long interest in collecting works by the Spanish master.

• Picasso’s first known monotype, Portrait de femme à la mantille (late 1905), was originally made on glass. Seeger’s version is the only known proof done on paper. Estimated at £60,000-80,000, this majestic monotype shows Picasso as one of the greatest experimenters and innovators in the history of printmaking.

An Exceptional Selection of Ceramics by Pablo Picasso

The sale will include an exceptional selection of over 100 ceramics by Pablo Picasso. This follows Sotheby’s sell-out auction in March 2013 of Important Ceramics by Pablo Picasso From A Private Collection, in which 100% of the lots sold as bidders competed fiercely for the prized works. The selection includes plates, vases, jugs, bowls and tiles designed by Picasso, depicting a range of classical and mythical forms alongside portraits of animals and people. The individual pieces range in estimate from £800 to £15,000.