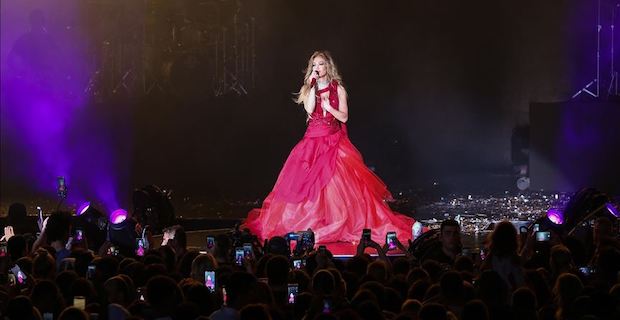 World-famous pop star Jennifer Lopez was on stage in Antalya Tuesday night to enrapture her audience in the coastal city in western Turkey. She hit the stage in a five-star hotel in the Serik district as part of a world tour -- “It’s My Party” -- across 25 cities. “I miss your country very much,” she told her fans convened for the sparkling stage.

She performed for two hours to delight audience of 2,500 people, including celebrities, famous footballers and managers.

New single “Medicine” was on the pop-star’s repertoire, as well as other hit songs “On The Floor”, “Ain’t It Funny” and “Love Don't Cost a Thing”.

The audience was surprised when Lopez invited her daughter Emme Anthony to the stage for a duet. The duo gained vigorous applause of the fans.

Lopez’s stage and backstage were specially decorated with white roses coming from Isparta, a southwestern province in Turkey famous for roses.

Keywords:
Jennifer Lopez
Your comment has been forwarded to the administrator for approval.×
Warning! Will constitute a criminal offense, illegal, threatening, offensive, insulting and swearing, derogatory, defamatory, vulgar, pornographic, indecent, personality rights, damaging or similar nature in the nature of all kinds of financial content, legal, criminal and administrative responsibility for the content of the sender member / members are belong.
Related News