Experts debated on future technologies and how UK and Turkey can continue the excellent bilateral ties... 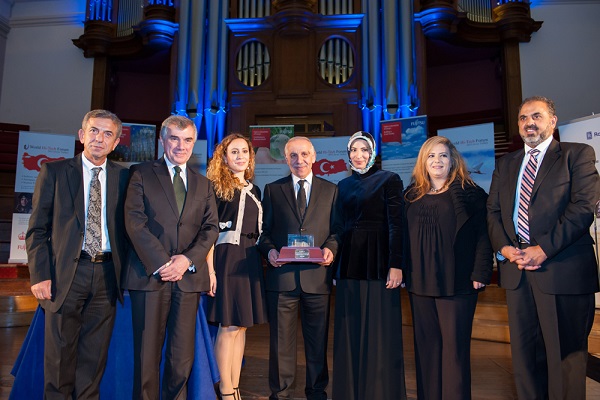 Experts debated on future technologies and how UK and Turkey can continue the excellent bilateral ties...

Organised by the British Institute of Technology and E-commerce (BITE) in Association with Rolls Royce, Fujitsu. TBCCI, Turkish Embassy and the All Party Parliamentary Group on Entrepreneurship UK House of Lord., The industry award which recognises the pioneering work of champions in the sector through its industry awards in association with Rolls Royce, runs a range of technology, science and business programmes that provide broad-based academic teaching as well as practical experience.

It is not just those who invent and discover new technologies that are pioneers.

Those who champion technology are also at the forefront of innovation.

It is these “champions” who are recognised each year in the British Institute of Technology (BITE) awards in association with Rolls Royce.

Past winner Dr A P J Abdul Kalam, the 11th President of India, for example, was recognised for his contribution to the success of India’s technology and development.

While this year’s winner Rob Smith of BAE systems won the BITE Champion of Technology award for the leadership he showed in working with the Eurofighter Typhoon.

“The awards recognise individuals who have shown continued and effective commitment to the leadership, creativity and dissemination of technological advances for the benefit of the wider community and economy,” says Dr Muhammed Farmer, founder and CEO of BITE.

Other past winners include Professor Zhores Alferov - the Nobel Laureate for physics for his outstanding work on nanotechnology - and Dr Richard Noble, director of the Bloodhoud Project that aims to break the world land speed record.

BITE and the All Party Parliamentary Group on Entrepreneurship also recognise the work of visionaries in the sector, awarding the Outstanding Business Leadership Award for 2013 to Remzi Gur. Ambassador of the Republic of Turkey, Ünal Çeviköz gave the award to The creator of the Ramsey brand, Remzi Gur.

“This award recognises an outstanding individual who has best demonstrated exceptional leadership and vision,” adds the Rt. Hon. Lord Erroll

“Bringing together talent, industry is what BITE does – we are a catalyst organisation seeking to advance and apply this expertise through research, consultancy and education in the pioneering of technology, science and business,” continues Dr MacAskill.

I would like to start by thanking the British Institute of Technology and E-commerce (BITE) for organising this forum. It is a great pleasure for me to address this distinguished audience. I hope that today’s discussions will deliver comprehensive insight on Turkey’s stance on hi-tech and investment incentives provided for hi-tech projects.

Let me start by outlining Turkey’s economic strategy for the next decade. Turkey has a number of goals to achieve by the year 2023. This is the year when Turkey will celebrate the centenary of the proclamation of the Republic. By 2023, Turkey plans to take place among the top 10 economies in the world and achieve a gross domestic product of $2 trillion. Turkey aims to transform its economy into a high value added and knowledge based hi-tech economy. In this vein, Turkey plans to implement hi-tech mega projects particularly in the fields of transportation, infrastructure, energy, health, urban transformation and defense in the period ahead.

As part of 2023 vision, Turkey also launched a project that aims at transforming Istanbul into an international financial center. This project offers global companies a chance to run their financial operations in the region through İstanbul, supported by various incentives, a skilled workforce and a cosmopolitan city with a vibrant local economy. Turkey continues to carry out necessary legal and financial regulations in line with its bid to reposition İstanbul as an international financial center.

Turkey is also investing more in human capital on the basis of its demographic advantage. Turkey is spending nearly one-fifth of its national budget on human capital stock. In this vein, one of the key priorities is to enhance the quality of education. Recently, compulsory education was extended from 8 years to 12 years. The quality of the education system is expected to increase through the extensive use of technology and updated curriculum arrangements.

In line with the targets set for 2023, a robust policy framework on technology and science has been adopted in 2010. The Ministry of Science and Technology and the Scientific and Technological Research Council of Turkey (TÜBİTAK) implement the National Science, Technology and Innovation Strategy for 2011-2016 to deliver targeted support to Turkey’s competitive sectors like automotive, manufacturing, information and communications technology. This strategy also prioritizes the sectors with high growth potential like defense, aerospace, health, energy, water and food.

Additionally, several measures have recently been taken to strengthen Research, Development and Innovation (R&D+I) activities. R&D+I spending figures show a tremendous increase. Between 2002 and 2012, nominal spending on R&D+I increased more than 3.5 times to over $11 billion. Turkey’s 2023 vision envisages the allocation of at least 3% of its GDP ($60 billion) to R&D+I activities and the employment of 300,000 full-time researchers.

Technoparks have been designed to support R&D+I activities and attract investments in hi-tech. For the time being, 34 technoparks are operational in different cities of Turkey and 16 technoparks are currently under construction. Technoparks present various advantages for the investors. Revenues derived from software development and R&D+I activities in the technoparks are exempted from income and corporate taxes until 31 December 2023. Salaries of support personnel employed in these zones are also exempted from all taxes until 31 December 2023.

It is also important to encourage small and medium-sized enterprises (SMEs) to make use of technology and innovation. These enterprises play a very important role in Turkish economy due to their large share in total number of enterprises and in total employment. The business environment should be conducive to the creation, growth and development of the SMEs and to entrepreneurial activity in general. The main objective of the policy towards the SMEs is to improve their productivity and to increase their competitiveness with the extensive use of technology. To this end, some support mechanisms are in place to empower the SMEs. Legal arrangements have been already adopted to facilitate R&D+I intensive start-ups with ready access to finance and complementary mentoring.

Significant improvements have registered Turkey on the world economic scale as a remarkable emerging economy, the 16th largest economy in the world and the 7th biggest economy in Europe. Inevitably, this has changed the focus of foreign investors and put Turkey under the spotlight on their radar screen. As one of the major recipients of foreign direct investment (FDI) in the region, Turkey stands as the 13 th most attractive FDI destination in the world. As of the end of 2012, more than 33,000 companies with foreign capital operate in Turkey. Majority of FDI inflows to Turkey come from the EU, North America and the Gulf countries. Turkey follows a multi-dimensional strategy in order to attract FDI. This strategy aims at reforming every related sector and putting in place necessary regulations in order to create a friendly and favourable atmosphere for foreign investors.

As I mentioned before, improvement of aerospace and defense capabilities is one of the priorities of Turkey. Turkey aims to reduce its dependence on imports and cultivate its own export markets in defense industry. The main target in the defense industry since the 2000s is to develop high competitive domestic products in the prioritized areas. To this end, joint ventures with overseas companies has an important role to play.

Currently, Turkey has a fast-growing defense industry. Turkish defense equipment expenditure is approximately 4 billion dollars per year. Turkey has the second-largest armed forces in NATO. As of this year, Turkey has around 2300 defense-related firms in operation, compared to just 40 in 2000.

In the last ten years, Turkey has made considerable stride towards modernising its armed forces and indigenous defense industry by putting more focus on innovation and technology. The spending on defense and aviation research and technology has risen more than tenfold during the last decade. R&D+I investments in defense industry approach $1 billion per year.

Turkey’s booming defense industry went far beyond supplying just the Turkish armed forces and turned into a global player with exports reaching 1.3 billion dollars last year. In the last ten years, the annual revenue of Turkey’s defense and aviation industries increased fourfold and these industries’ exports increased fivefold. According to strategic defense plan for 2012-16, the defense industry aims to increase yearly revenue to $8 billion and exports to $2 billion by 2016. Presently ranked 16th in terms of turnover, Turkish defense industry aims to be among the top 10 industries in the world by 2023.

Turkey started to attract international attention with its domestically produced defense products. Armoured vehicles, coast guard boats, night vision systems and many other defense systems are produced by the Turkish defense industry at international standards. The engineering capacity in the defense industry has grown remarkably during last decade. Turkey is also working towards the domestic production of fighter jets. The first test flight is expected to take place in 2023.

Turkey recently has taken big steps in aerospace technologies with three new investments. The first is the establishment of an organized industrial zone to be located in an area of more than 5 million square meters in Ankara's Kazan district. Domestic and foreign companies specializing in aviation and space are expected to cluster in this zone. This industrial zone, being built next to Turkey's defense giant Turkish Aerospace Industries (TAI), is expected to be functional next year.

The second major step Turkey has taken in the area of space and aviation is the creation of the Space and Satellite Integration Center within TAI. This center is supposed to work on producing all sorts of observation and communications satellites. In another word, the center will be an assembly, integration and testing facility for all types of satellites, both military and commercial. Turkey is also investing in R&D+I to build its own capacity to produce the individual components that make up the satellites.

The third investment comes from ASELSAN, a defense industry giant that produces electronic defense products. As parts of Turkey's efforts to domestically supply the needs of the Turkish Armed Forces, the company is establishing a facility where high-tech radar and electronic warfare technologies will be produced.

I believe there is a strong potential of cooperation in the field of defense industry between Turkey and the UK. Two countries are moving in the right direction. The companies working in the defense industry are coming closer to each other. UKTI is regularly attending the defense exhibitions in Turkey and Turkish defense companies are following the defense fairs in the UK with keen interest. Now there are many relationships developing at a company-to-company level not only for development of projects in Turkey but also conducting cooperation in third countries. I hope that the fourth meeting on defense industrial cooperation, which is currently being held in London, will produce productive outcomes.

We encourage the UK defense companies to work together with their Turkish counterparts to develop competitive defense products for both countries. In this way, UK companies could enjoy the advantage of cost-efficient manufacturing in Turkey and Turkey could benefit from the technology transfer. Thank you."