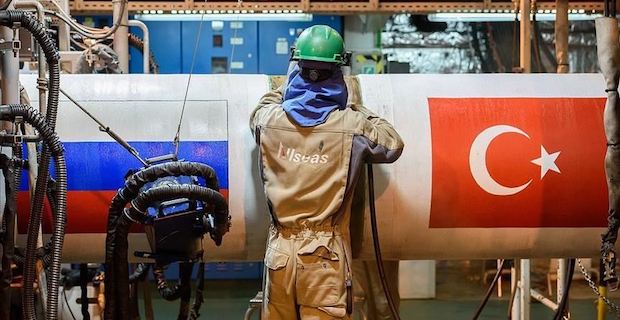 The opening ceremony of the TurkStream natural gas pipeline will be held on Wednesday in Istanbul with the attendance of Turkey's President Recep Tayyip Erdogan and Russia's President Vladimir Putin. The TurkStream natural gas pipeline has a total capacity of 31.5 billion cubic meters, out of which the first line will carry 15.75 billion cubic meters of Russian gas to Turkish consumers.

The second line will carry another 15.75 billion cubic meters of gas to Europe via Turkey.

BOTAS built the first line that will connect to Turkey’s existing gas grid, while the second line, to be operated by a Gazprom-BOTAS joint venture, will stretch to the Turkish-European border in Turkey's Thrace region.

Keywords:
TurkishRussianTurkStream
Your comment has been forwarded to the administrator for approval.×
Warning! Will constitute a criminal offense, illegal, threatening, offensive, insulting and swearing, derogatory, defamatory, vulgar, pornographic, indecent, personality rights, damaging or similar nature in the nature of all kinds of financial content, legal, criminal and administrative responsibility for the content of the sender member / members are belong.
Related News