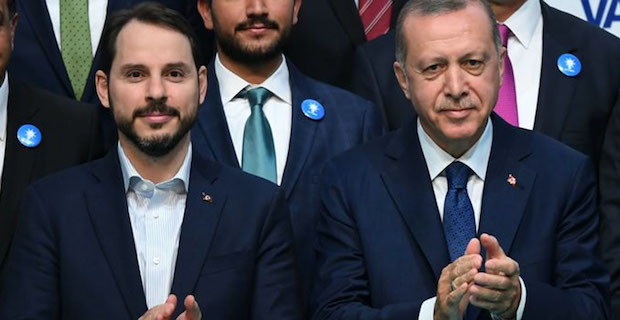 Turkish President Recep Tayyip Erdogan accepted the resignation of Treasury and Finance Minister Berat Albayrak, an official statement announced on Monday. "As it is known, Berat Albayrak issued a statement on Sunday evening via one of his social media accounts asking for his exempt from the post citing his health," read the statement by the Communications Directorate.

"Upon an assessment by our president, the request by Treasury and Finance Minister Berat Albayrak of his exempt from the post was approved," it stated.

In a period when even developed countries are experiencing serious economic difficulties due to the pandemic in addition to regional and political crises, Turkey has proceeded on its way with the least damage possible in this critical period with the efforts of Albayrak, it added.

"Achievements of our minister have been appreciated by the Turkish president," the statement noted.

Keywords:
Berat AlbayrakRecep Tayyip ErdoganTurkish President
Your comment has been forwarded to the administrator for approval.×
Warning! Will constitute a criminal offense, illegal, threatening, offensive, insulting and swearing, derogatory, defamatory, vulgar, pornographic, indecent, personality rights, damaging or similar nature in the nature of all kinds of financial content, legal, criminal and administrative responsibility for the content of the sender member / members are belong.
Related News