Turkish housing sales up in July 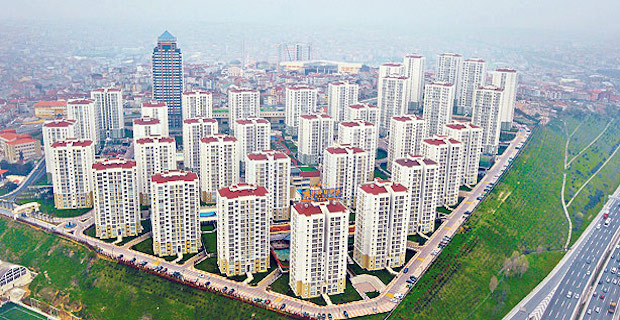 A total of 123,878 houses were sold in Turkey in July, marking a 6.9 percent rise over the same period last year, the country's statistics agency announced Wednesday. Some 57,617 houses were sold for the first time while the rest were second-hand sales, according to the Turkish Statistical Institute (TurkStat). "For the house sales of July 2018, Istanbul had the highest share of house sales with 15.7 percent and 19,503 sold houses," the agency said in a statement. Turkey's largest city was followed by capital Ankara and the Aegean province of Izmir with 12,119 units (9.8 percent of all sales) and 6,322 units (5.1 percent of all sales), respectively.

"House sales with mortgage had a 24.5 percent share of all house sales in Turkey," it added.

Last year, the overall residential property sales amounted to 1.4 million in Turkey with a 5.1 percent annual hike over 2016.

Among foreigners, most sales were made to Iraqi nationals with 584 houses, TurkStat said.

Melih Tavukcuoglu, head of the Istanbul Anatolian-side Contractors’ Association, said the organization aims to end the year with an income of $5 billion.

"The sector can earn more income due to foreign exchange rates in property sales to foreigners," he added.

TurkStat will release its next property sales report -- for August -- in Sept. 19.

Keywords:
Turkish HousingTurkish Housing Sales Up
Your comment has been forwarded to the administrator for approval.×
Warning! Will constitute a criminal offense, illegal, threatening, offensive, insulting and swearing, derogatory, defamatory, vulgar, pornographic, indecent, personality rights, damaging or similar nature in the nature of all kinds of financial content, legal, criminal and administrative responsibility for the content of the sender member / members are belong.
Related News