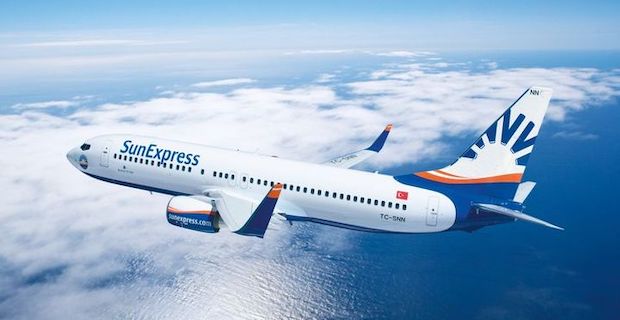 SunExpress, a joint venture of Turkish Airlines and Lufthansa, restarted its international flights after a two-month hiatus due to the COVID-19 pandemic, it announced on Thursday. On Wednesday, the carrier operated 38 international flights between Turkey -- from Izmir on the Aegean coast, Mediterranean resort city of Antalya and the capital Ankara -- and European countries, according to a press release.  The firm provides several flights between Turkey and Europe currently -- to Cologne, Dusseldorf, Frankfurt, Hamburg, Munich, Stuttgart, Hannover, Berlin, Brussels, Paris, Copenhagen, Wien, Zurich, Amsterdam, and Stockholm.

At present, European countries impose travel restriction for non-Europe citizens but EU citizens, people with resident permit or family reunification visa, can travel to the EU countries, the carrier said.

With all aircraft disinfected and equipped with HEPA filters, passengers must wear face masks during flights as well.

Established in 1989, SunExpress is headquartered in Antalya.

The coronavirus, which first appeared in China last December, has spread to 188 countries and regions across the world, dealing a severe blow to air travel globally.

The virus has killed over 416,000 people worldwide, with total infections around 7.36 million and more than 3.45 million people having recovered from the disease, according to figures compiled by the US' Johns Hopkins University.

In Turkey, the virus has infected 173,036 people so far and claimed 4,746 lives as daily infections and deaths continue to slump. The vast majority of people have gone on to make a full recovery.

Keywords:
SunExpressCOVID-19Normalization
Your comment has been forwarded to the administrator for approval.×
Warning! Will constitute a criminal offense, illegal, threatening, offensive, insulting and swearing, derogatory, defamatory, vulgar, pornographic, indecent, personality rights, damaging or similar nature in the nature of all kinds of financial content, legal, criminal and administrative responsibility for the content of the sender member / members are belong.
Related News