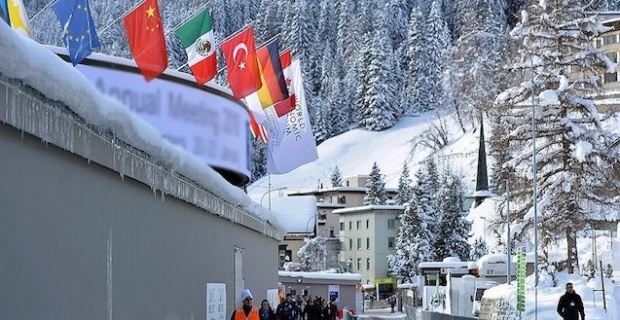 With a focus on reshaping capitalism, the participants of this year's Davos summit will discuss how to make the world a fairer place, protect the planet from climate disaster and, especially, establish bridges to resolve conflicts in global hotspots.

Thousands of chief executives, investors and policymakers from all over the world are set to gather in the Davos ski town of the Swiss Alps for the 50th anniversary of the World Economic Forum (WEF).

Beginning on Jan. 21, the four-day annual gathering will be held under the shadow of the fourth industrial revolution and its ensuing huge transformations in the global economy, from the rise of China and the big tech sector to worsening income inequality and the emergence of ethical companies.

In trying to deal with the big issues facing the world, the forum decided on a new manifesto, Stakeholders for a Cohesive and Sustainable World -- drawing on a concept memorialized in the forum's 1973 manifesto.

Stakeholder capitalism is considered the guiding principle of the WEF, with the underlying principle being that a company should serve all its stakeholders, not just its shareholders. These include its employees and suppliers, as well as its community.

Over nearly fifty years, Davos summits have been a mirror of major world events of their time -- from the fall of the Berlin Wall to the rise of economic globalization and runaway climate change.

"The intersection of the economy and environmental concerns will be front and center this year," Sebastian Buckup, the director of programming at the WEC, told Anadolu Agency.

Buckup said that in the wake of the 2008 financial crisis and the following European debt crisis, most of the risks emphasized at the WEC a decade ago were related to economics.

However, he said that this was now changing.

"Many economic topics are still absolutely core, but discussions related to environmental sustainability and social cohesion are more and more coming to the fore since they are directly related to many economic concerns," he underlined.

According to Buckup, climate change is now seen as a major global issue and deserves even greater attention.

He said the Davos would prioritize this issue of ecology by providing a platform for young activists, like 17-year old Swedish climate activist, Greta Thunberg.

This year, nine other teenage "changemakers" will join her.

The youngest, 13-year-old Naomi Wadler, campaigns in the U.S. against gun violence.

Cruz Erdmann, 14, is another member of the changemakers team and an award-winning marine wildlife photographer.

"Water warrior" Autumn Peltier, 15, will also attend the summit. She campaigns for the rights of First Nation communities in Canada, whose water has been contaminated by industrial activity and oil pipelines.

At this year's Davos summit, young climate activists aim to mobilize corporates in responding to the risks of climate change, ensuring that measures to protect biodiversity span the globe from forest floors to ocean beds.

"The other dimension, of course, is social cohesion," Buckup continued, explaining that all countries are confronted with such challenges, regardless of whether or not they enjoy rapid economic growth.

Citing a study that found that roughly 1.1 billion people would face skill insecurity as a result of technological change, he said one dimension of social cohesion was job security -- helping people find and retain jobs.

"One of the big initiatives we will announce is related to re-skilling 1 billion people by 2030," he said.

All eyes on Davos

According to the WEF's website, the summit will employ more than 1,000 media representatives -- one for every three participants -- to keep the public informed.

Over 150 sessions will be available to watch online this year, and will also be open to public attendance.

The Forum wants to receive videos from anyone with ideas on how to make the world a better place, whether about the environment, politics, technology or other subjects.

The best videos will be posted on the WEF website and shared using the hashtag #fairerworld.

For the first time, the Forum has invited a group of YouTube influencers from around the world who will be posting videos from Davos giving a fresh perspective and reaching a new and younger audience.

Whether it will impact the most imposing problems people around the world face, Davos once again will be a platform that will hear different voices.

Keywords:
Spirit Of Davos 2020
Your comment has been forwarded to the administrator for approval.×
Warning! Will constitute a criminal offense, illegal, threatening, offensive, insulting and swearing, derogatory, defamatory, vulgar, pornographic, indecent, personality rights, damaging or similar nature in the nature of all kinds of financial content, legal, criminal and administrative responsibility for the content of the sender member / members are belong.
Related News