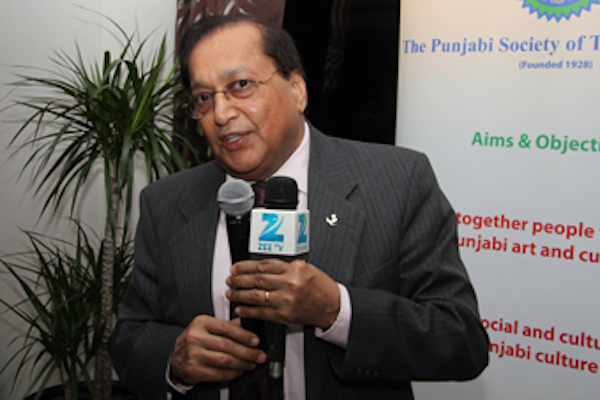 The President of the Punjabi Society of the British Isles, Mr Atul Pathak OBE welcomed the guests and paid tribute to the BJP government in India led by Shri Narendra Modi Ji. In his passionate speech, he reaffirmed his commitment and support for the unity and integrity of India.

Prof. Nat Puri, who led the team which organised the biggest welcomed reception of 60,000 people for Modi ji in Wembley also praised the work being done by the BJP government under the leadership of Modi Ji.

Mr CB Patel, also praised the BJP led government in India and the progress it has made since coming to office. He recalled his various meetings with Modi Ji and how he always came back inspired.

Dr Rami Ranger CBE, Patron of the Punjabi Society praised Mr Jolly and Mr Mehta for their visit and commended their commitment to India and the BJP. He praised Mr Modi for galvanising the scattered Indian diaspora in 95 countries with his worldwide tours after coming to power.

Lord Loomba also praised Mr Modi for the work his government was doing for rebuilding India and the “Make in India” campaign.

Mr Vijay Jolly spoke about the British Indian diaspora being noble ambassadors of India who uphold Indian values and have gained much respect for India in the UK through community service and business. He spoke about the work of the Indian Prime Minister Shri Narendra Modi and the BJP in making India a superpower on the World stage.

Mr Mehta spoke about the need of having ever growing closer ties with people of Indian origin living abroad to ensure that exports out of India flourish and the “Make in India” project becomes a success.

Mr Jolly and Mr Mehta were then presented with the Pride of India Award by Mr Atul Pathak OBE, President of the Punjabi Society of the British Isles for their commitment to India and the BJP.

The vote of thanks was given by Dr Ravi Gidar, Patron of the Punjabi Society of the British isles.

Speeches were followed by scrumptious dinner and light background entertainment.