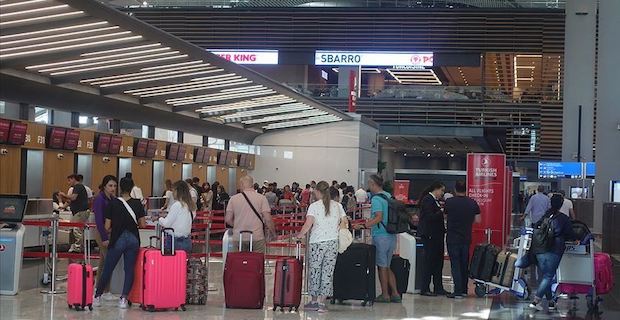 The Istanbul Airport welcomed 30 million air passengers as of today, Turkey's transport and infrastructure minister said on Friday.  The number of new destinations from Istanbul Airport is expected to reach 10 until the end of this year, Cahit Turhan said. Istanbul Airport, whose first phase officially opened in October 2018, took over air traffic from the former main Ataturk Airport on April 6.

The airport is projected to serve 200 million passengers annually with a full capacity after the completion of all four phases with six runways by 2028.

It is set to become a global aviation hub hosting more than 100 airlines and flights to over 300 destinations around the world.

Keywords:
Istanbul AirportIstanbul Airport Passengers
Your comment has been forwarded to the administrator for approval.×
Warning! Will constitute a criminal offense, illegal, threatening, offensive, insulting and swearing, derogatory, defamatory, vulgar, pornographic, indecent, personality rights, damaging or similar nature in the nature of all kinds of financial content, legal, criminal and administrative responsibility for the content of the sender member / members are belong.
Related News