Prime Minister Boris Johnson has claimed that Transport for London (TfL) was effectively bankrupted before the coronavirus pandemic after Mayor of London Sadiq Khan accused the government of "draconian" demands in exchange for a bailout. 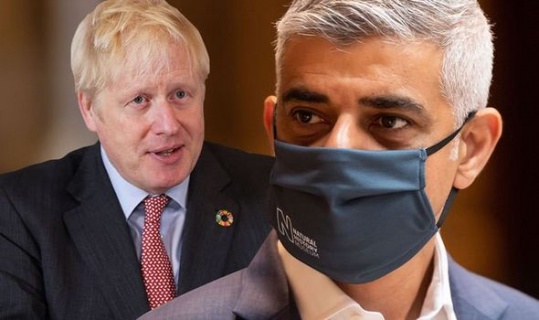 Johnson and Khan clash over TfL 'bankruptcy'. Prime Minister Boris Johnson has claimed that Transport for London (TfL) was "effectively bankrupted" before the coronavirus pandemic after Mayor of London Sadiq Khan accused the government of "draconian" demands in exchange for a bailout.The prime minister said any increase in fares was "entirely the responsibility" of Khan who he said had "left a massive black hole in its finances".But Khan called Johnson a "liar" and said he had successfully reduced the deficit, which he said was accrued by the prime minister when he was mayor in 2016, by 71%."Covid-19 is the sole cause of TfL's challenges. The PM wants to increase fares, the C-Charge and taxes and end free travel for children and older Londoners," he tweeted.

The mayor said government proposals for a second bail-out of TfL include higher council taxes, an expanded congestion charge zone and a hike in Tube and bus fares.

The Department for Transport said talks over a settlement were continuing.

TfL bosses have asked for a £5.7bn package to prop up services for the next 18 months, after passenger numbers and revenues plummeted in the aftermath the March lockdown. In May, the government granted TfL £1.6bn in emergency funding to keep services running.

Keywords:
TfL BankruptcyJohnson And Khan
Your comment has been forwarded to the administrator for approval.×
Warning! Will constitute a criminal offense, illegal, threatening, offensive, insulting and swearing, derogatory, defamatory, vulgar, pornographic, indecent, personality rights, damaging or similar nature in the nature of all kinds of financial content, legal, criminal and administrative responsibility for the content of the sender member / members are belong.
Related News