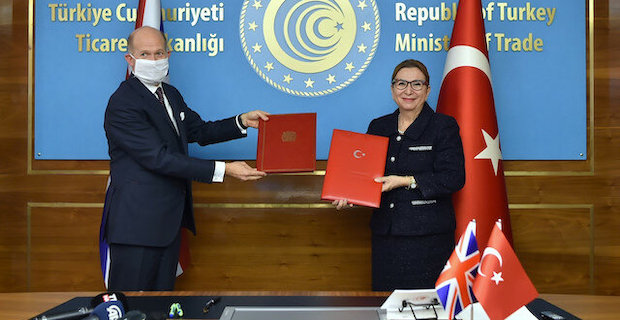 The free trade agreement signed by Turkey and the UK on Tuesday will ease the two countries' bilateral trade target of $20 billion, said a top official.

After reaching the Brexit deal, the UK signed the free trade agreement with Turkey, just after one with the EU, a gesture which shows the strength of their commercial relations, Osman Okyay, head of the Turkey-UK Business Council of the Foreign Economic Relations Board, told Anadolu Agency.

If the agreement faces any delay, Turkey's trade volume with the UK could suffer, he added.

Okyay said Turkey could not be part of the free trade agreement between the EU and the UK which necessitates the update of the customs union immediately.

Turkey and the UK on Tuesday signed a historic free trade agreement -- set to go into effect as of Jan. 1.

Without the deal, about 75% of Turkish exports to the UK would be subject to tariffs, causing losses of some $2.4 billion. But the deal eliminates this risk.

Keywords:
Free Trade AgreementTurkeyUKOsman Okyay
Your comment has been forwarded to the administrator for approval.×
Warning! Will constitute a criminal offense, illegal, threatening, offensive, insulting and swearing, derogatory, defamatory, vulgar, pornographic, indecent, personality rights, damaging or similar nature in the nature of all kinds of financial content, legal, criminal and administrative responsibility for the content of the sender member / members are belong.
Related News