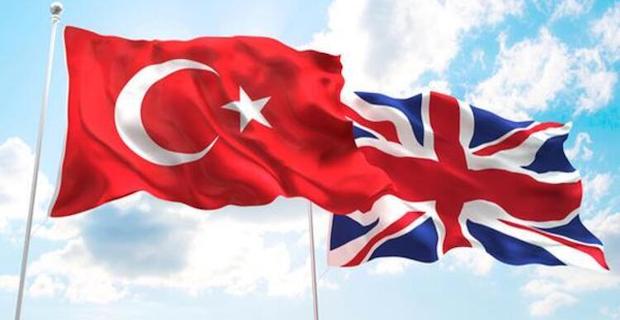 Turkey will be one of post-Brexit Britain’s top destinations for a trade deal after the European Union and the U.S., but despite the strong bilateral desire to strike a trade pact, experts are cool on the prospects of it happening anytime soon. The U.K. formally left the EU on Jan. 31, 2020 but will remain in a transition period with the EU and Turkey until Dec. 31 this year.

During the year, the U.K. will continue to be subject to trade terms set by the EU but will also be free to strike new trade deals.

Earlier this month, the Turkish Trade Ministry said Ankara and London would discuss a free trade deal through existing working groups between the two countries.

The focus will be on minimizing friction on imports and exports flowing between the two countries.

“I believe that an FTA would be beneficial for both sides, undoubtedly. For Turkey, the U.K. is the biggest trading partner in Europe after Germany,” Ipek Ozkardeskaya, a senior analyst at Swissquote Bank, told Anadolu Agency, using the acronym for free trade agreement.

The trade volume between Turkey and the U.K. in 2018 was $18.5 billion – second only to Germany – with Ankara exporting $11.1 billion to the U.K. and receiving $7.4 billion in imports. This was a 15.7% increase in exports and 13.7% increase in imports for Turkey in comparison to the previous year.

Turkey will not want to risk its trade surplus with the U.K. and as such wants to be at the front of the line to strike a trade deal with Britain. With its exports to the U.K increasing, Turkey is one of the countries with the most to lose from a no-deal Brexit.
“A comprehensive agreement could primarily benefit Turkish tourism and consumer staples, while for the U.K., petroleum and mining sectors and carmakers could see the benefits of an FTA,” Ozkardeskaya added.
Turkey and the U.K. invest extensively in each other at both the governmental and business level.
British firms invested around $409 million in Turkey in 2018, with Turkish firms investing around $323 million in Britain over the same period. Over the past 10 years, the U.K. poured $7.2 billion in investment into Turkey, and Turkey invested $2.5 billion in the U.K. Over the same period, bilateral trade surged from $9.4 billion to $18.5 billion.
“It appears that the U.K. has got the upper hand,” Ozkardeskaya said of the upcoming negotiations.
“Imports from the U.K. are high-value-added goods, whereas the same is not true in the opposite direction. So Turkey needs to sell more to compensate for its imports, and that undeniably gives Turkey less negotiation power against the majority of its trade partners in Europe.”
Speaking to Anadolu Agency, Desmond Lachman, a resident fellow at the American Enterprise Institute, took a slightly different view.
“When it comes around to the U.K.-Turkish negotiations, Turkey should be in a relatively good position in that the U.K. will be needing free trade agreements. However, there are bound to be a lot of sensitivities, including how agriculture is to be dealt with.”

One obstacle already in sight is the EU Customs Union, of which Turkey is a part and that the U.K. will leave after the end of the year. A customs union is a free trade area with a common external tariff.
Any Turkey-U.K. free trade deal would only be able to take place following an EU-U.K. free trade deal, as Turkey must stay in line with EU trade policy due to its membership in the customs union, even if it is not a full EU member.
“The fact that Turkey must follow certain guidelines with the EU countries to keep its relations solid could complicate things if the negotiations between the EU and the U.K. take an ugly turn,” Ozkardeskaya said.
“The main risk here is the EU putting pressure on Turkey regarding its talks with the U.K. Such a scenario would lead to a diplomatic casse-tete as Turkey cannot sacrifice its relations with the EU countries to get a deal with the U.K.,” she added.
The bigger problem in the view of analysts is the tight timeline the U.K. has imposed on the negotiations with the EU.
“Experience suggests that free trade arrangements are not easily or rapidly negotiated. Indeed, they generally take at least two to three years, and in some cases longer. This makes it highly unlikely that the U.K. will be able to negotiate a free trade deal with Europe by end 2020. In the case of the EU-Canada free trade deal, it took seven years to negotiate,” Lachman said.
“While a member of the EU, the U.K. ran down its trade negotiating capability since such negotiations were done on its behalf by the EU. Now it is seeking a free trade deal with both the EU and the U.S. This means that it will prioritize those two negotiations and leave negotiations with other countries like Turkey for another day. It would also probably want to prioritize free trade agreements with China and India,” he said.
“In short, I would not hold my breath for an early U.K.-Turkish free trade deal,” he said.
Ozkardeskaya agreed, saying: “I think that is one big challenge for both the EU and the U.K. Realistically, I do not believe anything tangible could come out of these trade negotiations any time before the end of 2022, and it will take at least half a decade before we start seeing things getting in shape. Triggering Article 50 took 3.5 years, and it was only between two counterparts -- the EU and the U.K.
“Imagine now,” she said. “It will be between the U.K. and every single one of these EU countries – who will be influencing, manipulating, threatening and pushing each other in all possible directions to find a satisfactory setup for everyone. Good luck.”

Keywords:
TurkeyBritainUK-Turkey Trade Deal
Your comment has been forwarded to the administrator for approval.×
Warning! Will constitute a criminal offense, illegal, threatening, offensive, insulting and swearing, derogatory, defamatory, vulgar, pornographic, indecent, personality rights, damaging or similar nature in the nature of all kinds of financial content, legal, criminal and administrative responsibility for the content of the sender member / members are belong.
Related News