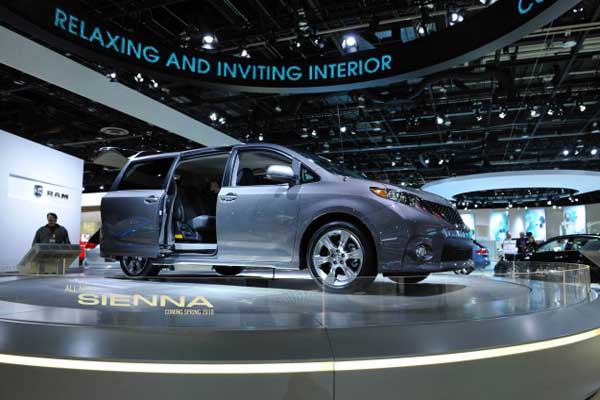 Saddled with bankruptcy and a crushing $18 billion debt, Detroit is gearing up to host one of the world’s largest automotive exhibitions. The show brings with it a potential economic boon for the reeling city. An estimated 850,000 attendees, 5,000 journalists and a myriad of automotive representatives are set to take part in the show. That influx could bring the Motor City $365 million in revenue this year alone, according to Bob Shuman, the Chairman of the North American International Auto Show (NAIAS). Also, 1,500 to 1,700 will find employment during the show's two-week run.  "Internationally, we're a top three show in the world, and I, whether it’s the Rotary Club, or the local government or whatever, I preach that message, that this is a jewel. We have to nurture it, polish it and keep it a few steps ahead of the other guy, because there is competition," said Shuman while speaking to AA during the show’s media preview at the Cobo Center. While other shows may attract even larger crowds, or have more diverse showroom floors, it is the sheer number of exclusive worldwide reveals and the quality of exhibits, which locks in the show’s worldwide prestige. This year the show is expected to host somewhere between 50-55 reveals. And manufacturers have already come out swinging.

Chevrolet unveiled the Stingray Z06, which boasts a daunting 625 horsepower supercharged V8 engine, and is set to start at $52,000. The Stingray won the 2014 North American Car of the Year Monday, while Chevy also took Truck of the Year with its Silverado.

The auto giant also unveiled a redesigned 200 series, which aims to compete against similar family sedans, such as the Toyota Camry and Ford Focus.

For its part, Ford rolled out a brand new aluminum body F-150 pickup truck. Switching from steel to aluminum sheds nearly 320 kilograms from the pickup’s weight from previous models, and boosts fuel efficiency.

While finely polished cars shimmered under pinpoint lighting, each automaker is seeking to attract crowds with unique, and at times, highly engaging demonstrations.

Ford presented one of the most striking exhibits with classic Mustangs paired against the recently redesigned 2014 iteration as journalists hopped in competing Ford Fiesta ST racing simulators. All this was set against a simulated F-150 assembly line.

For Shuman, it is imperative that the show continues to maintain such innovation. The NAIAS hopes to do just that by giving manufactures the time they need to prepare their extravagant displays. According to Shuman, some auto companies began to construct their displays when the hall opened three months ago in October.

"These reveals could go somewhere else. We have to stay a step ahead," he said.

As auto companies prepare to bring their displays to the public, it is uncertain which one will come out on top.

With nearly a million anxious automotive enthusiasts set to rush the Cobo Center starting in four days, only time will tell.