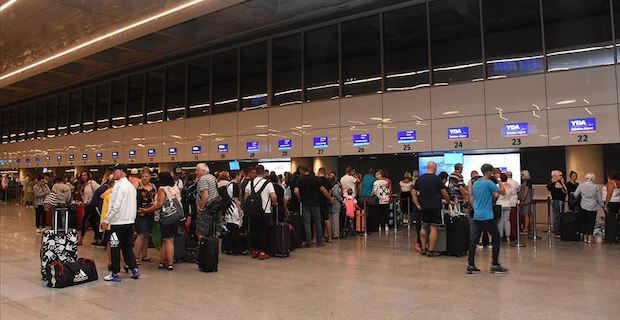 British tourists are leaving Tuesday from Turkey's southwestern Mugla province following the collapse of U.K. tour operator Thomas Cook. Nearly 1,000 tourists have started returning to the U.K. from Dalaman Airport in Mugla via 12 planes that were sent by the British Civil Aviation Authority after the company's announcement that it had gone into liquidation.

An additional 3,000 tourists are expected to leave from the province during the day.

Tourists waiting for return flights at the airport were informed by officials who came from the U.K.

Hours after Thomas Cook's collapse, Turkish authorities moved to reassure tourists in Turkey who booked and paid for their holidays through the iconic firm.

All bookings by the 178-year-old company -- including flights and holidays -- were canceled, they stated.

Around 150,000 people are expected to be affected by the canceled flights.

Keywords:
Thomas Cook
Your comment has been forwarded to the administrator for approval.×
Warning! Will constitute a criminal offense, illegal, threatening, offensive, insulting and swearing, derogatory, defamatory, vulgar, pornographic, indecent, personality rights, damaging or similar nature in the nature of all kinds of financial content, legal, criminal and administrative responsibility for the content of the sender member / members are belong.
Related News