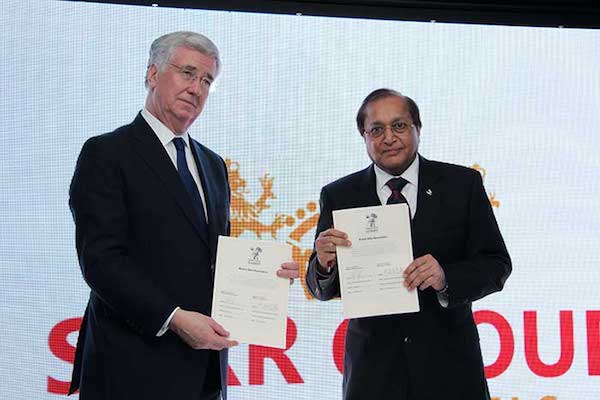 The event commenced with the spectacular Band of the Brigade of Gurkhas performing the national anthems of India and the United Kingdom followed by a one-minute silence to remember the bravery and sacrifice of PC Keith Palmer, the bravery of all our emergency service men and women and those who have lost their lives or were injured in the terror Attack in Westminster on 22nd March 2017 (a day earlier).

Dr. Rami Ranger CBE, British Sikh Association Chairman speaking about the need for the Sikh contribution in both World Wars to be taught in our schools.

An emotional video presentation on Sikh involvement in the British Army and both World Wars was given by Mr Matthew Ward of History Needs You in which he spoke of the strong bond of friendship developing between the British and Sikh soldiers. In his welcome address, Dr. Sukhbir Kapoor OBE, Secretary General, the British Sikh Association and the Vice Chancellor of World Sikh University, London highlighted the innate bravery of the Sikhs and how in 1699, Guru Gobind Singh inaugurated the Khalsa and how its formation inculcated the strength, bravery and heroism of the Sikhs, with the brave warriors protecting the mother land from invasion at the strategically critical Khyber Pass. The dynamism and strength was such that it was the strength of the Khalsa that removed the Mogul Empire.

A special video presentation courtesy of the BBC showcasing the impact of the Sikhs in the British Indian Army and both World Wars was followed by the speech by Dr. Rami Ranger CBE, Chairman of the British Sikh Association, who spoke of the growing need for the contribution of Sikhs in both World Wars to be taught as part of the curriculum in our schools. It is scantly known the over 84,000 Sikh soldiers died and over 109,000 injured over the two world wars and there should be a better understanding of our shared history. He spoke of the need to resurrect a Sikh regiment within the British army to keep alive the bravery of those who defended the empire with their lives, he stated that the regiment will only be in name and will be open to people from other faiths to join as Sikhs by their very nature believe in being inclusive and never insular. Dr Ranger was met with rousing applause when he announced the £1 million pledge for the recruitment campaign for the Sikh regiment. As part of Dr Ranger’s closing he requested that Mr Virendra Sharma MP for Southall and Ealing and Ealing Council leader Cllr Julian Bell support the BSA in its call to erect a memorial in Southall for the fallen Sikh soldiers.

His Excellency Mr Y.K. Sinha, High Commissioner of India to the United Kingdom was delighted to be at the event and spoke of his own family history with the His Excellency’s father serving in the Gurkha regiment and later becoming the President of the Gurkha regiment. The High Commissioner also spoke about Guru Gobind Singh and how he was proud to have been born in Patna, the birthplace of Guru Gobind Singh. His Excellency spoke of Sikh soldiers being the brave hearts of the Indian army and they continued to make sacrifices for India and the World. In closing His Excellency spoke of the delight of seeing the growth and development that the Sikh community had given to the UK.

The Rt. Hon. Sir Michael Fallon MP, Secretary of State for Defence, said it was a great privilege to be attending the programme and opened by greeting the audience in Hindi and Punjabi. He congratulated the great Sikh community on forthcoming Vaisakhi. He highlighted that the Sikhs add an immense contribution to the UK economy. The Secretary of State paid tribute to the bravery of the soldiers at the Battle of Saragarhi and to Flight Lieutenant Jon Singh who, when serving in Afghanistan whilst under fire, landed his helicopter in the most difficult of circumstances. In closing the Secretary of State stressed the importance of the dictum of Guru Gobind Singh of tolerance, justice and freedom and how importance these shared values are. He spoke of the post BREXIT era where there is a greater need to reach out to mutual and important friends such as India and the Commonwealth. He further highlighted that India is the 3rd largest investor in the UK and the UK is the largest G20 investor in India with bi lateral trade in the region of £17.5 billion pounds.

Lieutenant General Andrew Graham CB CBE, made an appeal on behalf of Combat Stress where he is Chairman. He gave an insight into the psychological trauma some our brave soldiers have gone through on the battlefield. Lieutenant General Graham was then presented with cheques for a total of £15,000 which comprised of £5,000 donations from the British Sikh Association Executive Committee; Mr Jasminder Singh OBE, Chairman of Edwardian Hotels London and Mr Amit Patel of Auden McKenzie. A further £10,000 was pledged by Mr Gopichand Hinduja, Co-Chairman of the Hinduja Group and £5,000 from Mr CB Patel, Editor in Chief of the ABPL group.Mr James Greenrod introduced the Armed Forces Covenants which Over 1,500 businesses and organisations across the UK have already signed, making practical pledges that have made a difference across the Armed Forces community. Dr Rami Ranger CBE, Chairman of the British Sikh Association signed the covenant on behalf of the association alongside the Rt. Hon. Sir Michael Fallon MP, Secretary of State for Defence. A covenant was also signed by the Directors of the SARR Hotel group (Dr Rami Ranger CBE, Dr Gursharan Chadha, Dr Ravi Gidar and Mr Anil Sharma) pledging special discounts to armed forces personnel at their hotels across the country. The signing of the covenants were followed by another spectacular performance by the Band of the Brigade of Gurkhas of Gurkhas. Energetic dance performances by Mr Karan Singh Pangali and the K-SPARK dancers followed by delicious Indian food served by Madhu’s Event Catering.