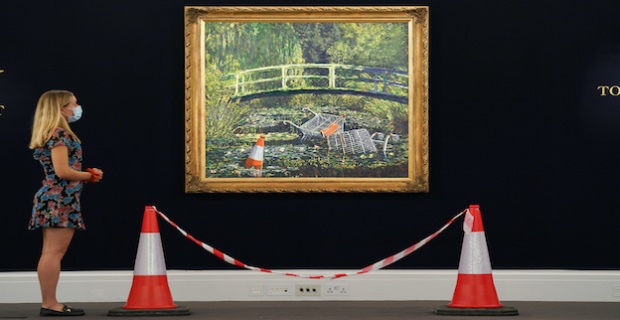 AVRUPA TIMES/LONDON-BANKSY’S CONTEMPORARY TAKE ON CLAUDE MONET’S MASTERPIECE: “In one of his most important paintings, Banksy has taken Monet’s iconic depiction of the Japanese bridge in the Impressionist master’s famous garden at Giverny and transformed it into a modern-day fly-tipping spot. More canal than idyllic lily pond, Banksy litters Monet’s composition with discarded shopping trollies and a fluorescent orange traffic cone. Ever prescient as a voice of protest and social dissent, here Banksy shines a light on society’s disregard for the environment in favour of the wasteful excesses of consumerism. Recent years have seen seminal Banksys come to auction, but this is one of his strongest, and most iconic, to appear yet. From Love is in the Bin, to the record-breaking Devolved Parliament, to this take on Monet, October just wouldn’t be complete without a big Banksy moment.” 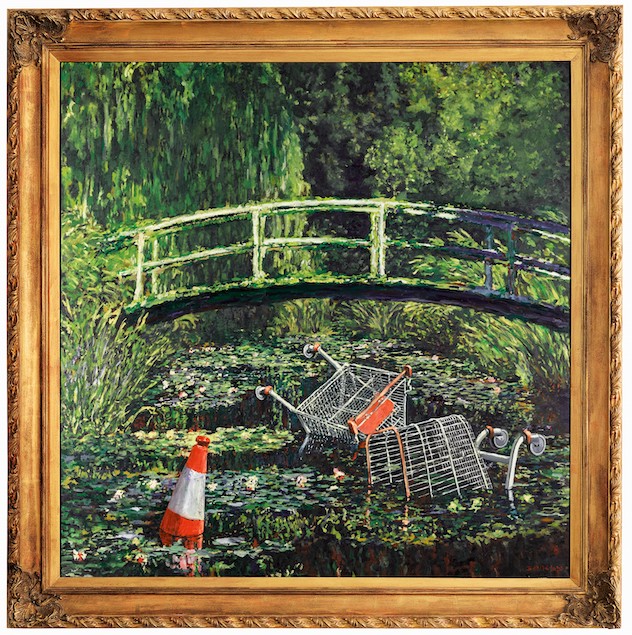 “Long considered the apogée of Impressionism, Claude Monet’s instantly-recognisable portrayal of the Japanese Bridge at Giverny was a scene the artist returned to in the last three decades of his life. Residing in the world’s most esteemed collections, including the Metropolitan Museum in New York and London’s National Gallery, only one or two of these fabled works are left in private hands. They are, for many collectors, the holy grail – the sort of work a serious collector will live in hope of acquiring. And here we see Banksy take ownership of that, by putting a tongue-in-cheek mark on what has been held up by generations as an icon of Western Art History.”


18 September 2020, London: Banksy’s dissident version of Claude Monet’s Impressionist masterpiece will go on public display in Sotheby’s New Bond Street galleries today for a special two-day preview, before it is unveiled in New York and Hong Kong later this month [34-35 New Bond Street, W1S 2RT]. Show me the Monet (2005) will then return to London, where it will be offered for sale with an estimate of £3-5 million on 21 October. The painting will star as a highlight of Sotheby’s third livestream auction event, ‘Modernités / Contemporary’, which brings together two sales of Modern and Contemporary art held in sequence from Paris and London.

Show me the Monet was first shown 15 years ago as part of Banksy’s second gallery exhibition at 100 Westbourne Grove in Notting Hill, West London. Titled ‘Crude Oils: A Gallery of Re-mixed Masterpieces, Vandalism and Vermin’, the free-admission show comprised 22 of the artist’s hand painted canvases, hung in a disused shop space. The exhibition remained on view for two weeks, attracting large crowds, queues and a headline on the evening news during its opening night. Before entering, visitors had to sign a waiver and prepare to share the space with 164 rats, which Banksy had purposefully hired from a film and theatre company to complement his artworks, quite literally overrunning the temporary venue with rodents. Fortunately, no rats will feature in the Sotheby’s display.

Created in 2005, Show me the Monet hails from a series collectively known as the ‘Crude Oils’, comprising what Banksy has termed “remixes” of canonical artworks. In it, the artist takes and subverts the language of art history to recreate renowned artworks with his own witty reworkings, and with his own distinct and equally free, brushstrokes: among them, Vincent van Gogh’s Sunflowers portrayed wilting or dead in their vase; Edward Hopper’s Nighthawks augmented by an angry man in Union Jack boxer shorts moments after breaking the bar window with a chair, and Andy Warhol’s Marilyn Monroe re-faced with Kate Moss. The present work may be interpreted as a comment on consumerist culture, a criticism of the commercialisation of art, a lament for the demise of the environment, or all of the above.

Sitting within a larger body of work, the series is an extension of Banksy’s earlier investigations into painting when he began putting his own stamp on conventional looking oil canvases bought at flea markets around London. The first public display of a work from this series took place in 2003 in Tate Britain, when the artist secretly installed Crimewatch UK Ruined the Countryside for All of Us - a small oil painting of a bucolic country scene covered with blue and white police tape. In the artist’s own words, “If you want to survive as a graffiti writer when you go indoors, I figured your only option is to carry on painting over things that don’t belong to you there either.” The sale of Show me the Monet comes a year after Banksy's Devolved Parliament sold at Sotheby’s London for a record breaking £9.9 million ($12.2 million).

Three of Monet’s most spectacular large paintings from this series will also be brought together at the National Gallery in London for the first-ever exhibition of decorative arts by the Impressionist painters in September 2021.

Keywords:
BanksySotheby’sCONTEMPORARYMONETMONET’S MASTERPIECECLAUDE MONETShow Me The MonetSotheby’s Europe
Your comment has been forwarded to the administrator for approval.×
Warning! Will constitute a criminal offense, illegal, threatening, offensive, insulting and swearing, derogatory, defamatory, vulgar, pornographic, indecent, personality rights, damaging or similar nature in the nature of all kinds of financial content, legal, criminal and administrative responsibility for the content of the sender member / members are belong.
Related News