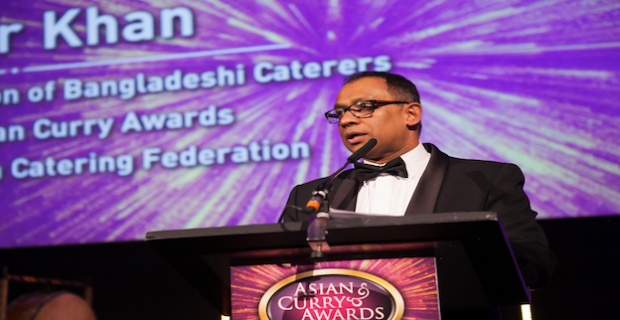 The days of the cheap Friday night curry are coming to an end. More than 800 VIP guests attended the Asian hospitality sector’s most prestigious event, the Asian Curry Awards in association with Just Eat.  Held at the Grosvenor House in London’s Mayfair on Sunday 22nd November, the evening was hosted by the BBC’s Kate Silverton.Top accolades went to Benares, which was named London’s Fine Dining Restaurant of the Year, with Cambridge’s Navadhanya winning a similar award for the regions.

Heritage Dulwich scooped the Asian Restaurant of the Year for London.

The Asian Restaurant of the Year for Scotland is Panache in Elgin, with Grand Sultan in Port Talbot winning the award for Wales.

The Kushi chain of restaurants in Essex and East London was named Local Restaurant Group of the Year.

Ambrette Kitchen, in Ashford, Kent won the Just Eat national trophy for Takeaway of the Year.

There was also a Special Recognition Award for Shah Athar, COO of UK Curry Connect, for his ‘outstanding contribution to the catering inspiration through leadership and inspiration.’

The full list of local, regional and individual winners can be viewed at www.asiancurryawards.co.uk

Addressing an audience of ambassadors, high commissioners, senior politicians, embassy officials, journalists and business owners, Yawar Khan, Chairman of the Asian Catering Federation, which organises the Awards and acknowledged the generosity of Federation members, who donated thousands of takeaways to frontline NHS staff, key workers, the elderly and the vulnerable.

Khan spoke of the sector’s resilience and innovation in the face of such adversity, but predicted, “The days of the cheap Friday night curry are coming to end,” in the face of steeply rising costs and severe staff shortages,” but assured that, “There is no shortage of customers willing to pay for a superior product.”

He said the supply of cheap labour from Eastern Europe, the Indian subcontinent and Asia are over.  With the Government committed to the UK becoming a high skill, high wage economy.

Khan indicated that the sector will have to improve pay and conditions - including the occasional weekends off - which is virtually unknown in the curry business.  Restaurants will need to enhance the overall dining experience, compete on quality not price and upskill their staff with structured training programmes and career progression.  Restaurateurs were encouraged to think about how to attract customers across the week and throughout the day - when more staff are available to hire.

Andrew Kenny, Managing Director of Just Eat UK, headline sponsors of the awards said: “Just Eat has worked closely with the Asian Catering Federation for a number of years. As we begin to recover from the pandemic, I’m delighted to celebrate our partnership by helping to recognise the fantastic achievements of those in our industry who have worked tirelessly through the last 18 months and
continue to do so.”

The Asian Curry Awards are the only national accolades open to the full range of diverse Asian cuisines.

Keywords:
Asian 2021 WinnersAsian Curry AwardsAsian Curry Awards 2021 Winners
Your comment has been forwarded to the administrator for approval.×
Warning! Will constitute a criminal offense, illegal, threatening, offensive, insulting and swearing, derogatory, defamatory, vulgar, pornographic, indecent, personality rights, damaging or similar nature in the nature of all kinds of financial content, legal, criminal and administrative responsibility for the content of the sender member / members are belong.
Related News